There were no midwives in attendance, no doctor. Hell, there wasn't even a bed and the twelve year old mother had been given zero pre-natal or ante-natal guidance. No gas and air. No proud father holding her hoof. 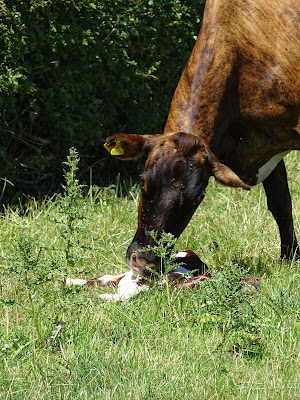 I had spent three hours on a circular walk in mid-Derbyshire plodding around and through the village of Crich and was just returning to Clint's resting place when I spotted a calf lying in a field with his doting mother in attendance. "Good photo opportunity", I thought to myself.

And then over to the left of the field, near the boundary wall,  I heard another cow. She had a chestnut brown and black brindle appearance and she was squatting down making grumbly lowing sounds. At first I thought she was sitting on something - maybe a rock or a pile of rags. But then she stood up and there was a baby calf protruding from her uterus. No sooner was the cow back on all fours than the calf was born - dropping to the soft grass below.

The doting and protective mother sniffed and licked the new born creature. At first I thought it was stillborn but very soon there was movement - the movement of life. At this point a local woman joined me in the lane  and we stood together peering over the hedge at the birth scene. 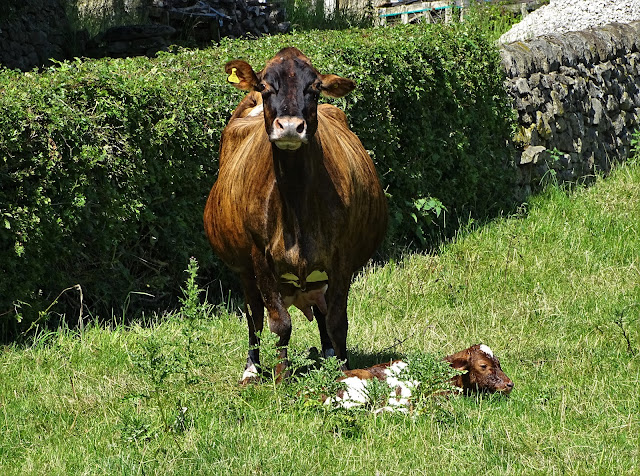 The mother kept licking with her rough tongue, stimulating the calf to fight for air and life. The woman waved across the field to the old farmer who came sauntering across the grass to check that all was well and I joked with him - "What are you going to call the calf? Buttercup or Daisy?" He chortled, revealing a row of uneven teeth - like neglected gravestones.

I stood in that lane for half an hour. The calf made a few gangly attempts to stand up but kept toppling over. Though I would have liked to stay longer, witnessing the moment when the newborn stood securely on her feet, I left happy in the knowledge that that miracle would certainly happen long before the sun set on that lovely summer's day. It was a good day to be born. 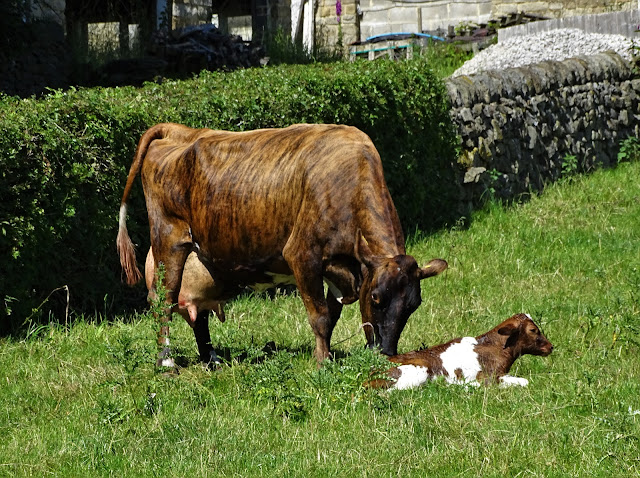