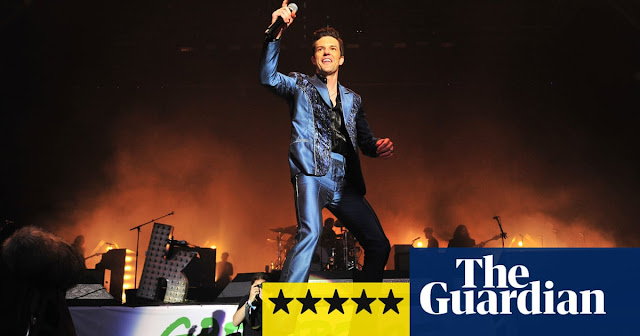 Though previously aware of The Killers, this was the first time I had hunkered down to properly listen to them and watch them perform. Musically, I guess I live in past times - frozen in the music of my youth and it takes a lot to draw me out of my nostalgic hideaway. But last night I was enthralled by The Killers. They are a tight, energetic band with an engaging repertoire. The songs are pure and self-penned and do not rely on computerised trickery for their delivery.

There's Dave Keuning on lead guitar, Mark Stoermer on bass and rhythm guitar, Ronnie Vannucci Jr on drums and at the front - singer and showman Brandon Flowers. The line-up is reminiscent of so many bands of the late sixties and early seventies. You imagine all the hours of practice in some barn or industrial unit - to perfect the songs, iron out the errors and create a style.

Last night Brandon Flowers was in his element - theatrical and totally committed, his tenor voice rising up above the electricity and yet part of it too. He is the father of three boys. Checking him out on Wilkipedia, I discovered that his wife Tana Mundkowsky suffers from a complex post-traumatic stress disorder though I have no idea how that came about. Any advice will be appreciated. It sounds so sad.

The Killers were triumphant. The Glastonbury crowd sang along and The Pet Shop Boys and The Smiths' guitarist Johnny Marr came up on stage. For a few minutes it seemed as if all the other stuff in this troubled world didn't matter. Are we human or are we dancers? Good question.
- June 30, 2019