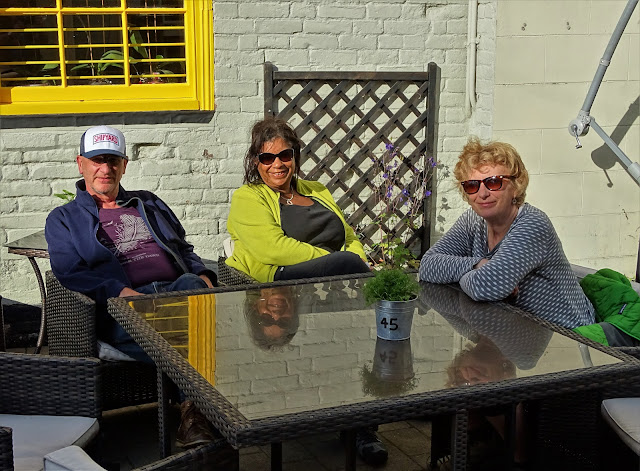 We had a lovely day out yesterday. This involved driving through Chesterfield then on through Mansfield and into the rolling north Nottinghamshire countryside.

Onward through the villages of Farnsfield and Edingley then right along a narrow country lane to Newhall Farm. That's where our friends Tony and Pauline were waiting with their touring caravan.

Tony soon rustled up a brunch of bacon, eggs and fried mushrooms with mugs of tea. We sat outside consuming the above and gossiping. I gave Tony a baseball cap that I recently won from "Shipyard" -  a brewing company based in Maine, USA. It fitted him perfectly whereas my bonce is so big that a normal-sized cap could never fit me - even at its fullest adjustment.

Soon the four of us were wandering along a leafy track to the peaceful  village of Halam. It was the first part of our four mile circular walk. The conversations continued. 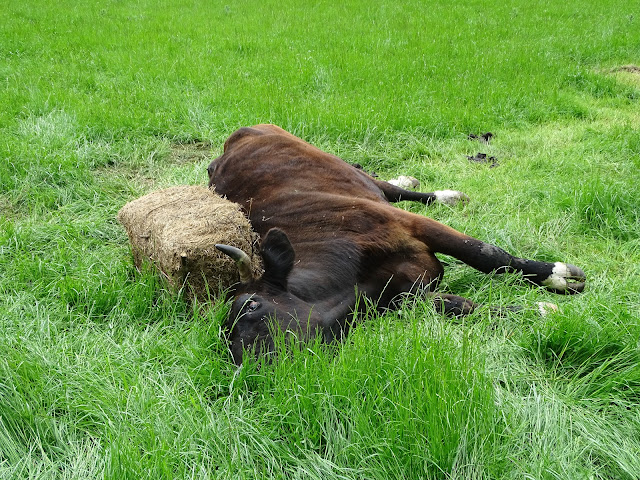 Past Machin's Farm and across the brook. In the next field we spotted a lone cow lying on its side. At first we thought it was dead but it was in fact still breathing. At one point it made an effort to rise from the ground but simply could not make it.

Later, back at the farm site, I informed the owner about what we had seen. Later still, he told me he had been in touch with the farm in question and they were waiting for a vet. They already knew about the dying cow.

Shirley, Tony, Pauline and I drove into Southwell - a town I visited for the first time just last year. We wandered around the magnificent minster church and then went for an early dinner at "The Admiral Rodney" pub. It was warm enough to sit outside.

Yet more conversation then back to the caravan via an unexpected circuitous detour that took in more of the lovely green countryside than the women in the back had been expecting. Needless to say they didn't stay quiet about the extra miles but as Clint's pilot I remained calm until we were back. After all, it would have been unpleasant to finish such a lovely day out on a sour note and ten minutes extra in a car is neither here nor there in the great scheme of things.
- June 01, 2019