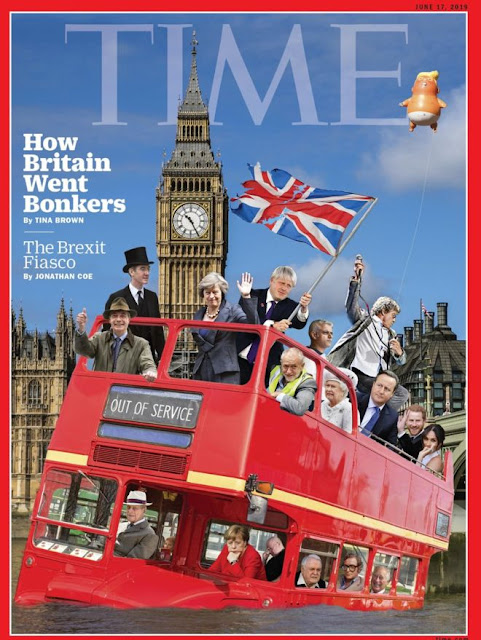 How wonderful that Britain has made the front cover of the latest "Time" magazine. The design is by a pop artist called Cold War Steve. His real name is Christopher Spencer and he was specially commissioned by "Time" to create the striking image shown above.

Cold War Steve frequently uses his mobile phone to create collages that include odd assemblages of politicians,  show business celebrities and other famous people. There's Prince Philip driving the bus and at the front of the upper deck there's the odious Brexit charlatan - Nigel Farage with the equally odious right winger Jacob Rees-Mogg just behind him in his top hat. Roger Daltrey of The Who is performing with his crotch disturbingly close to David Cameron's head.

And can you see the Trump baby blimp flying up high?

It's interesting that the explanatory straplines are "How Britain Went Bonkers" and "The Brexit Fiasco". They announce searching articles within the magazine.

I must say that I entirely endorse the assessments those headings make. Since the Brexit referendum three years ago, Britain has indeed seemed like a crazier and more troubled place. Our big red bus is sinking in The Thames. It is a madness that should never have been unleashed for, as Pandora discovered, once the bad spirits are out of the box, you just cannot get them back in.
- June 09, 2019