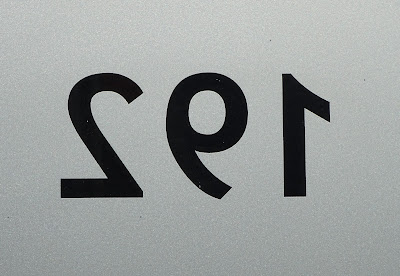 Above our front door there's a glass panel. Americans call it a transom window but here - where the English language was successfully concocted from a diverse range of ingredients - we call it a fanlight.

When we had our new door installed a couple of years ago, we asked the door company to include our house number in the translucent glass. I remember being quite specific about the size and font required as I didn't want large, rather vulgar numbers that would be almost as tall as the fanlight itself.

Having your house number in the fanlight is helpful to postal workers and the army of people now employed in delivering parcels from waiting vans. 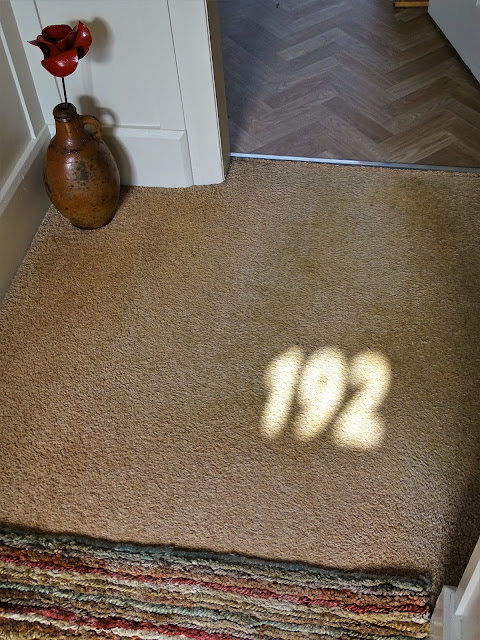 This morning when I got up, I noticed something on the carpet in our hallway. It was the image of our house number painted in sunlight that was beaming all over the front of our house. It has gone now as the sun arcs over the house but for a little while there was magic. Of course we have seen this phenomenon before but this was the first time I have bothered to capture it with my trusty camera.

In other news from Pudding Towers, I was feeling very restless late yesterday afternoon - like a young colt in a stableyard or a Welsh terrier in a corner country cottage or a Staffie in a swish West Hampstead apartment or a tousled hound in a Lincolnshire mansion.  I drove two miles out of the city to tramp a familiar circular route from Shorts Lane on the edge of the city.
The walk takes exactly an hour and I have plodded the selfsame route at least three or four  times a year for the last thirty years so I know I have completed it well over a hundred times. It's a good way of burning off energy in the country but only five minutes away from our house. And every time I walk that route there's something slightly different to see. Besides I can walk it in either a clockwise or anti-clockwise direction.