"We've got to get ourselves back to the garden..."

The famous Woodstock Festival of August 15th - 18th happened exactly fifty years ago. Some might say that it crowned the nineteen sixties. Three days of love and music. So much changed in that decade.
Like me, Joni Mitchell didn't make it to Woodstock but the festival touched her as it did me in my obscure village somewhere in  northern England. I learnt to sing and play her song and performed it on several stages in my late teens and later played it weekly at a bar in Chagrin Falls, Ohio when I was summer camp counselling nearby.

For some of us the hippy dreams of Woodstock never died. Dreams of peace and love, brotherhood and sisterhood, kindness to our planet, humanity towards others, delight in simple things like flowers and rainbows and poetry.

Lord knows that the world could do with more of what Woodstock represented right now.

The magical weekend began with Richie Havens up on the stage singing "Freedom" and finished with Jimi Hendrix playing "Hey Joe". In between Joan Baez sang Pete Seeger's stirring anthem for the people - "We Shall Overcome":-
Oh, deep in my heart
I do believe
We shall overcome, some day 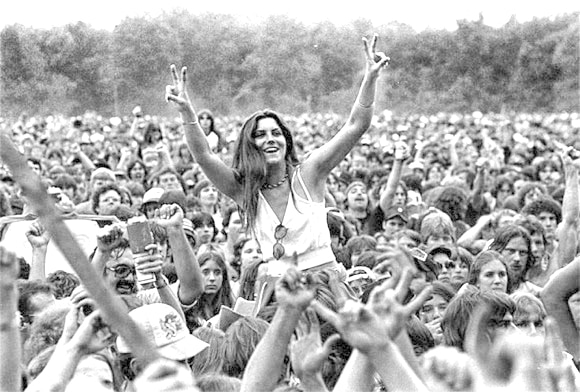