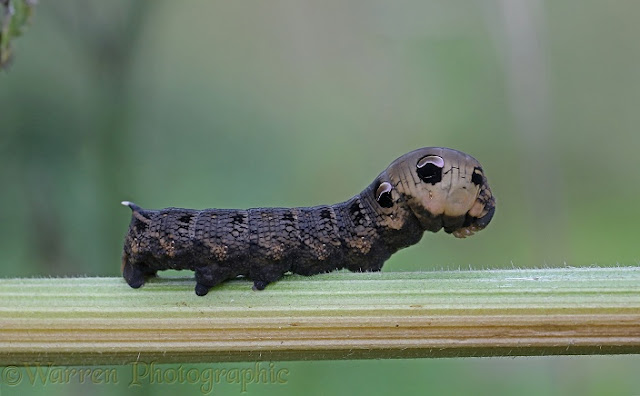 Last week I saw a creature I had never seen before. It was an elephant hawk moth caterpillar. It was in the palm of our neighbours' ten year old grandson's hand. I didn't have my camera with me so I have included a picture of such a caterpillar that I found in Google Images. See above.

With its bulbous snake-like head and its little feet , it looked as if it had crept out of a Disney cartoon... Ellie the Caterpillar voiced by Lady Gaga or some such celebrity. Co-incidentally, I think the caterpillar's face is very similar to Lady Gaga's.

Of course if that three inch caterpillar makes it, she will pupate - becoming a chrysalis for the wintertime and then next spring she will emerge as a beautiful elephant hawk moth. See below
Despite its name the adult moth itself is not especially large. It has a wingspan of around two inches and is excellent at hovering in the air above blooming flowers at night. The name of the moth chiefly derives from the caterpillar which from the front appears to have some sort of proboscis like an elephant:-