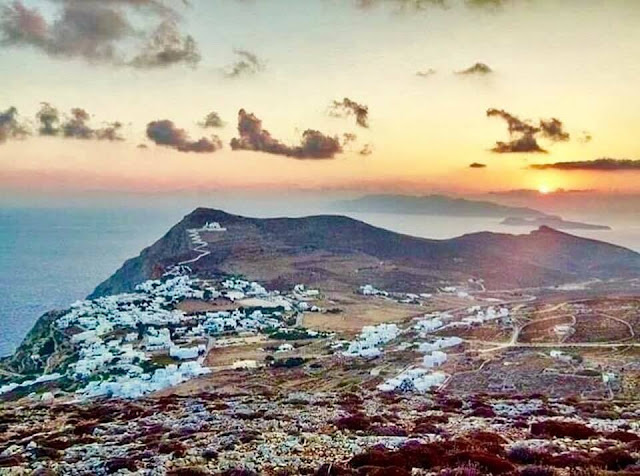 Life happened before The Internet and before blogging.

In my early to mid-twenties I travelled to Greece several times. It was almost wholly about the isles of Greece - not the mainland.

Once I travelled to Greece aboard a bus - The Magic Bus - from London  but otherwise I managed to muster enough money for the airfares.  When I got there, I mostly slept on beaches with occasional nights in cheap "pensions" or  rented rooms as I didn't have much spare money.

In those days it was amazingly cheap to eat and drink in Greece so most nights were spent in tavernas eating authentic Greek food and drinking Greek beer, retsina and  occasional ouzos which could be deadly - causing severe memory loss if you had too many.

In the daytime I swam in crystal clear bays, walked for miles, read books  or hooked up with other travellers. Then I might board another boat to travel to a different island.

Since joining The European Union, Greece has changed a lot. It  has lost some of its simplicity and its mystical connections with Ancient Greece seem less obvious, less melodic. There are more tourists and more "international" food. A once proud and unhurried country has become one of the poor men of Europe, judged more commonly in economic terms.

Sitting down to write this blogpost, I had not predicted such a long preamble. A simple Grecian memory had resurfaced and I just wanted to share it.

The year was probably 1978. July or August. I had disembarked  with a handful of others from a ferry at the port of the little-visited island of Sikinos in the heart of the Aegean Sea.

Up above the small ferry port  was the main settlement on the island  - the little town of Chora which was more like a village, less populous than it had once been. A cluster of white building blocks arranged randomly at the top of the hill - probably for historical defensive reasons. You reached it via a track that wound its way up from the port.

It was the middle of the day and scorchingly hot. The sun bore down like a giant laser beam as I trudged along, bearing my purple rucksack like a tortoise. Halfway up the hill, a minor disaster happened.  The front strap on my left sandal tore away from the sole. I had no other footwear so I limped into the town square with the strap flapping.

I unleashed my rucksack and sat on a wall feeling rather sorry for myself as I inspected my broken sandal. I don't know quite where he came from but just then an old man appeared. He took my sandal from me and turned it over a couple of times. He chattered away in Greek and gesticulated before scurrying away with the sandal.  I was hoping he had said he was going to fix the sandal but I didn't know for sure.

Half an hour later he had still not come back and I was starting to wonder if he had simply been playing a practical joke. But then he reappeared  - grinning a toothy smile and bearing the sandal triumphantly. He had riveted and re-sown the broken strap. I put it back on and it was perfect. He uttered joyous words in Greek and I uttered words of thanks in English as well as a few "efcharistós". I was very grateful.

He indicated that he was going to the cafe on the other side of the square. I followed him and in there I tried to buy him a drink to show my gratitude but he was having none of that. He was there to play backgammon with his old friends.  What he had done was to simply help another human being - a complete stranger- and he wanted no reward.

That was often the old Greek way.  True civilisation and that memory has stayed with me for well over forty years.  The nameless old man will have passed away long ago but in my memory something of his loveliness remains like a lesson.