The Internet can be like a maze that swallows you up. You go this way and that. Turn here and turn there. There's always something of interest to draw you in or catch your eye. Even after thirty years of regular use, I am still enthralled.

How did I get there yesterday? I wound up looking at paintings by Joan Baez. It's funny how many well-known  song-makers of recent decades have also shown genuine talent as painters. They include Bob Dylan, Ronnie Wood and Joni Mitchell.

Joan Baez has specialised in portrait painting. It seems to be the human face that has magnetised her creativity. She has painted pictures of many well-known celebrities such as Greta Thunberg, Tony Fauci, The Rolling Stones and her old boyfriend - Bob Dylan.

Joan Baez is now eighty one years old. She has lived a hell of a life of music, art, friendship and political struggle for just causes. Back in the sixties she would only perform at all-black campuses in America's southern states because of the lingering racism that polluted the college selection system. She was seriously involved in protests against the wars in Vietnam and Iraq and she supported environmental protests as well as the struggle for improved  LGBT rights.

For sixty years she has been a thorn in the side of America's establishment, reminding doubters that protestation matters and it can change things for the better. Without protest and fightback we are little more than sheep. It is easy to sit comfortably on the sidelines doing nothing - much harder to raise your head above the parapet and speak out as Joan has always done.

Here's Joan Baez's portrait of another battler for justice and fairness  - Ruth Bader-Ginsburg, completed in 2018, two years before her untimely death:- 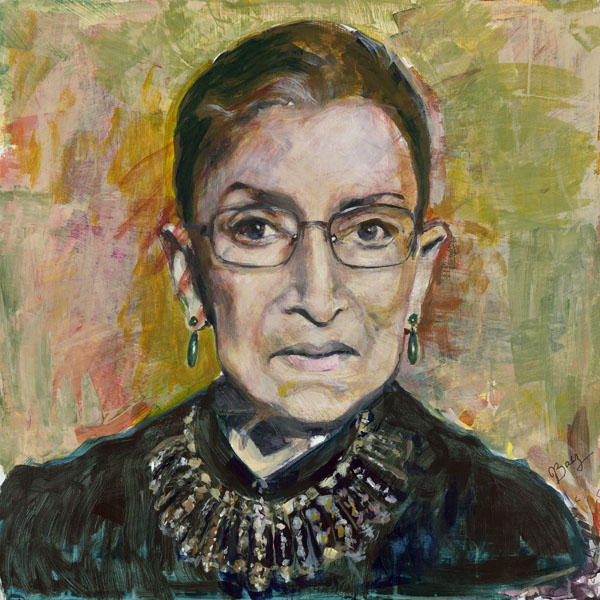 This is what Joan Baez said of her: “RBG spoke truth to power, and gave teeth to truth. She could be counted on for her non-partisanship and fairness, things that are now so scantily present in the offices of the highest law of the land.”
I think Joan caught Ruth Bader-Ginsburg's penetrating stare so brilliantly. It was a look that scanned the darkness like a lighthouse beam, searching for truth. No wonder Trump was quick to replace her in The US Supreme Court with another  unqualified puppet. Tragically, his spiteful  legacy lives on.
- October 02, 2022