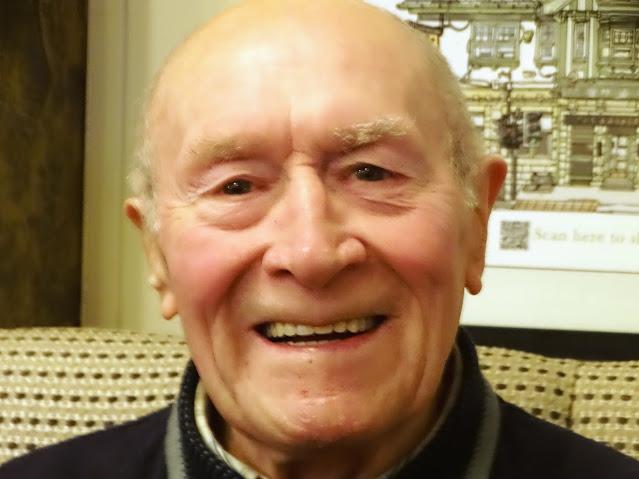 This is my friend Bert - short for Albert. He's showing off his new false teeth which he picked up last Friday. They have caused him a degree of discomfort but he's getting used to them. Soon he'll be eating normally once more and hopefully putting on a bit of weight. When you are eighty five years old, losing more than a stone in weight because you are without a bottom set of gnashers is surely not good for your general health.

Bert has never had a mobile phone and has never been on a computer for any reason whatsoever. He lives with one foot in the past and can remember being evacuated from London's East End to rural Northamptonshire when he was just a nipper. He can also remember V.E. Day and has a prized photo of a street party with trestle tables and him sitting there amidst the happy people.

He is unfailingly upbeat and positive with a sunny philosophy of life - smile and the world smiles with you...  if you have ailments don't moan about them just try to battle through.... try to look on the bright side of life. He is also a staunch Labour Party supporter and like me he has never voted for any other political party.

Bert worked from the age of thirteen to seventy - always in manual jobs from the tanning industry in Northampton to concrete casting and railway carriage refurbishments in Sheffield . He also recalls with some affection his two years of National Service at Warcop in Cumberland in the 1950's. In fact it's amazing how vivid some of those memories are.

Bert likes to sing songs from long ago such as "Bringing My Baby Back Home", "We'll Meet Again" and "Have You Got a Light Boy?" - a novelty song by The Singing Postman from 1966.

Everybody likes Bert. He's just one of those people who radiates goodwill.

He still manages to trudge up to the pub three nights a week even though he will be 86 years old in November. I suppose there will come a day when his pub visits come to a halt and on that day I shall miss him.

"No. Your age doesn't mean anything to me Bert. I like you because of the man you are and because of your sunny character".

He smiled contentedly at that.

I reckon that I have known Bert for thirty three years. I met him in the pub soon after we moved to this suburb of the city, south of Endcliffe Park by the main road to The Peak District National Park. I am glad  he gave me permission to snap these pictures last night. They were the best of the bunch. 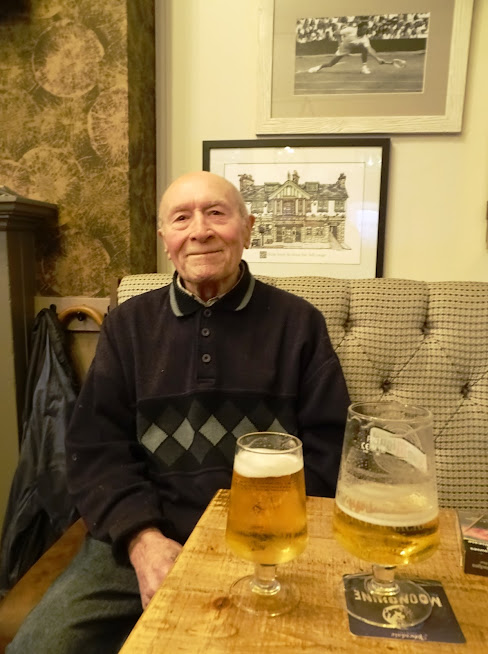