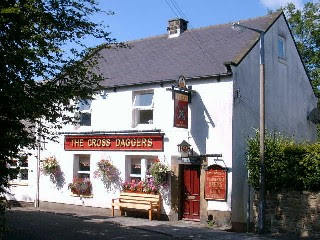 I could weep when I think about what is happening to pubs in England. So many great pubs have closed forever whilst others morph into samey chainpubs under banners like "Wetherspoons", "Ember Inns" etcetera. My own local, which once buzzed with customers every night of the week is becoming like a morgue some nights. Time was that I would avoid it on a Friday night because it felt like entering a rugby scrum but nowadays there are seats aplenty and last Saturday night there was just me and Bert in the taproom for the last half hour.
Last night I was with Big Dave in Dronfield which is a dormitory town on the southern edge of Sheffield. We had a delicious curry at "The Mint Leaf" before driving to a lovely little back street pub in Coal Aston called "The Cross Daggers". How delightful it was! Warm, clean and cosy with a welcoming landlord and well-kept beer. There was a framed "roll of honour" on the wall to those villagers who gave their lives in "The European War" which we of course now know as The First World War.
There was no jukebox music in "The Cross Daggers" - just the hum of conversation and occasional laughter. At ten o'clock the landlord - Anthony - brought round a big tray of fresh bread rolls lathered with dripping. They were free and, in spite of the earlier curry, I just had to do a taste test. When Big Dave and I got up to leave, Anthony and his wife wished us a safe journey - "Thanks for coming lads!" This was just how a good local pub should be. The pub of one's dreams.
Meantime, as the traditional English pub declines, out on the high streets and in the suburbs the coffee shop keeps marching on - "Starbucks", "Costa", "Caffe Nero" etc.. Though I never venture into these places, they seem to be becoming an important feature of the British social scene. Only the other day, Starbucks announced that they were planning to open another three hundred outlets in Britain over the next five years.

I wonder - is there a direct link between the death of the pub and the blossoming of coffee shops? What is it telling us about the way we live? The coffee shop is of the daytime but historically the pub was primarily of the nighttime. The coffee shop is unisex and welcomes children but the pub was/is primarily a masculine environment. Though one might get a caffeine buzz in a coffee shop, you won't wander out in a drunken haze with liver damage and an urge to fight. Coffee shops are mainly corporate and predictable in character but the traditional pub was/is more idiosyncratic - more quirky. I wonder what the connection is between this decline and this growth - I can't quite put my finger on it.
- December 09, 2011