One of northern England's loveliest and mildest autumns ever gave way to the creeping greyness of another dreary December. Drizzle. Short days. Nature drawing itself inwards. Gloves and hats and pasty faces. Someone coughing at the bus stop. These are not the sort of days when you want to be out and about enjoying the countryside.
However and even so and nonetheless, the weather forecast promised sunshine this morning and it dutifully arrived to banish the gloom - if only for one day. So I was out again for a couple of hours roaming around the Longshaw Estate to the south west of Sheffield.
I remember when Ian was a cub scout, he spent a weekend with his troop at a ramshackle old house on the moors. In those days, the isolated stone lodge - a former gamekeeper's cottage - had no modern conveniences and the boys slept in their sleeping bags on the old floorboards with a roaring log fire in the grate as howling winds whistled outside. Since then, the house - White Edge Lodge - has been repaired and refurbished by the National Trust and is available for rent as a holiday cottage. This is it:- 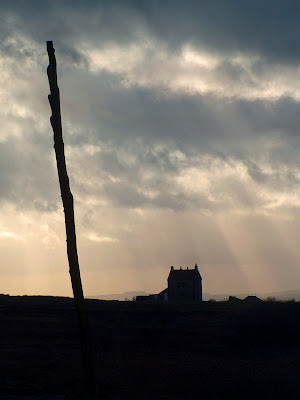 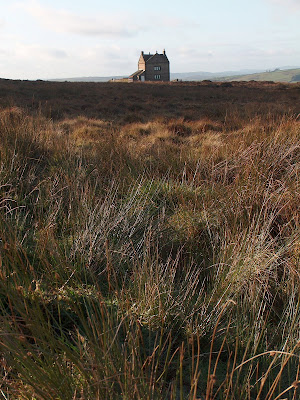 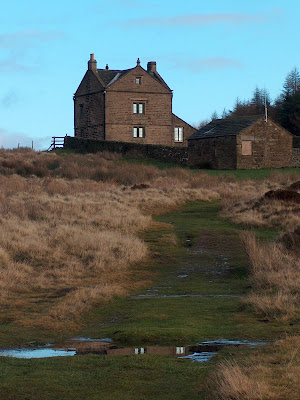 And here are two other pictures I took today on the Longshaw Estate:- 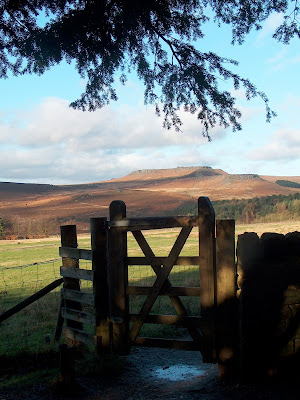 Beyond this gate you can see the shape of Carl Wark - a mysterious Iron Age hill fort that may have its true origins in the Neolithic period. There are structures up there built way back in the mists of time though most archaeologists agree it was never a human settlement as such - possibly just a fortified refuge - perhaps with some religious/ritualistic significance. I was going to go up there today but the gentle stream in the valley had become a torrent and I didn't fancy being washed down to Grindleford. Another time I think. 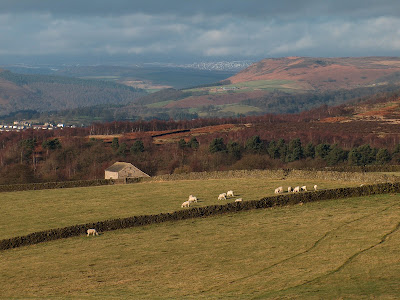 I don't think the picture above will enlarge - one of the quirks of posting pictures via Blogger but when I transferred it from my camera to the computer screen I said "Wow!". It was surely the best photograph I snapped today. It was taken from the Longshaw Estate looking to the north west and The Dark Peak where you can just make out a dusting of snow on those faraway hills.
Surprisingly more winter sunshine is expected tomorrow before we return to the greyness.
- December 12, 2011