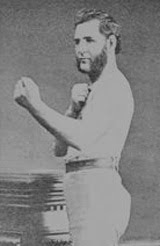 Gather round lads and lasses. Robert! Stop pulling Jenny's pigtails. Oh nice to see you Mr Rhodes! Glad you could join us! Oh and that's Miss Blawat with you. Why's your hair ruffled girl and why are you blushing like a beetroot? Now settle down. Today's lesson is all about sayings.
I have written two common English sayings on the blackboard. Can we all read them together please.... "As happy as Larry...As mad as a hatter... " Thank you. Now does anybody know the origin of either of these sayings. Yes? Thank you Libby. Go ahead.
"Well sir. The first one - As happy as Larry. I understand it entered the language from Australia. The first known printed use of the phrase happened in 1875 when used by a New Zealand writer called Meredith - 'We would be as happy as Larry if not for the rats'. One strong theory is that the saying relates to a successful Australian boxer called Larry Foley who retired unbeaten in the 1870's claiming a massive purse of £1000 for his very last fight. Who wouldn't have been happy about that?"
Thank you Libby. I have heard that theory myself but the saying could have also emerged from the term "larrikin" - an early nineteenth century antipodean loafer or young hooligan who would always be hell-raising with his chums, enjoying a life without responsibility. Even so I think you deserve a gold star for your answer Libby... Now the other phrase - "As mad as a hatter."
Okay Robert. Your hand was up first. No, stop that groaning the rest of you! Just ignore them Robert. Please go on.
"Well Mr Pudding sir. According to my homework investigations - it appears that the first printed use of the phrase was in Blackwood's Edinburgh Magazine of 1829. The most popular theory is that hatmakers used to use mercury in certain manufacturing procedures and over a period of time the mercury fumes often impacted on hatmakers' brains making them prone to trembling fits and other unusual behaviours. Some investigators claim that the term may have grown out of an earlier saying - "As mad an adder" - the only poisonous snake native to Britain - the venom of which could severely affect the mental state of its victims." 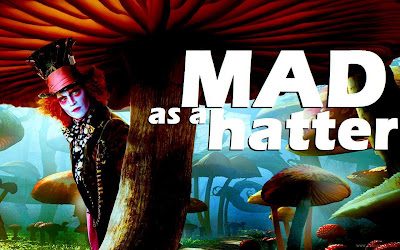 Thank you Robert. A gold star for you too. Now get out your exercise books everybody and invent two new phrases or sayings of your own in the hope that they might also enter our great language. Explain what they might mean. For example - given this week's news from Europe we could introduce the term - "to do a Cameron" - meaning either to walk off the pitch when the going gets too tough or to act hastily just to please others without thinking of the dire consequences of your actions. Now unless there are any questions please get on quietly while I read my newspaper.
- December 10, 2011