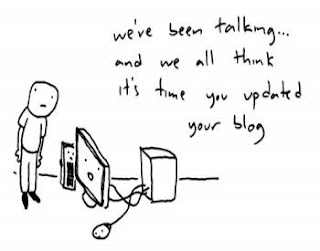 I stuck with the original Blogger interface from June 2005 until now and probably would have continued to work with that familiar friend till they buried me beneath the sod. However, unwelcome things kept happening. Facilities I had been used to kept dropping away. It seemed like the time had come to be converted. So I pressed the necessary keys and tabs and before you knew it the old blogface was gone - along with links to favourite blogs and my visitor counter.

A feeling of panic ensued but was shortlived as I set about picking a new appearance for this humble blog. Some of my former favourite blogs had become stagnant anyway - like abandoned goldrush towns so it was probably time for a clean up. I'm rather proud of the fact that in the last six and half years "Yorkshire Pudding" has been visited over 210,000 times. Blogger's in-built statistical counter didn't appear to go back as far as my old counters had done. 210,000! Once I stood in the old Wembley Stadium when it was filled to capacity. All my blog visitors would fill two stadiums though admittedly many of them would be clones.

Imagine that - three rows of identical Senator Bragues, a whole section of Welsh Jennys, a pressbox filled with identical Lancashire Parrots. What a nightmare!

HTML jiggerypokery is not something I take to very readily. It's for nerds and computer boffins. Nonetheless, I managed to insert a new visitor counter. Lord knows how long it will last before the company that hosts it start asking for money.

One could spend hours fiddling around with design templates, customising features, changing text size and colour but for the time being at least I am rather happy with my new unfussy design. I think posting will be easier now and I hope that you - dear and valued reader also approve of the new design. If you are in the mood to do so, please give me feedback. Thank you.
- December 19, 2011