I have no idea the name of this island, but if you have found it, I am delighted! I will wait in excited anticipation on the beach all day today, although my nose has already peeled once despite my palm-frond hat. By the way, I have discovered I am not alone! A turtle came to my beach yesterday! He was good company for a couple of hours. I have noticed I've started talking to myself, but that's understandable I guess.


I've been drinking a bit of seawater, not too much, and found a bit of plastic flotsam that makes a little water underneath that I can lick off, if I put it over a hole with fresh vegetation in it.
Looking forward to being rescued!  -  Katherine de Chevalle (Thursday Aprl 19th)

So we set off at dawn. The sea was like a millpond. The outboard motor puttered like a little motorbike as we sliced through the water. Maung and Thuza were with me and we'd brought plenty of water, a couple of jerry cans of extra fuel, fruit and a first aid kit.

Heat hung heavy over the Andaman Sea causing sky and water to merge in a haze. We saw tiny rocky islets and I smiled to see one particular tiny island because it was just like those desert islands you see in cartoons - a miniscule beach and one lonesome palm tree. Thuza and Maung sang an old Burmese fishing song and a flying fish flashed like a silver bullet over the old inflatable.

Finally, the island of Pulau Bada emerged from the heat haze. We slowed the outboard motor and drifted in to the first sandy bay we saw then we dragged the ancient RNLI craft up towards the palm trees. Katherine was nowhere to be seen but we saw footprints in the sand - just like "Robinson Crusoe" and we followed them round past the rocky headland to a second beach. And there she was just floating in those crystal clear waters:- 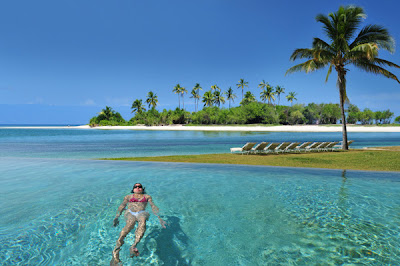