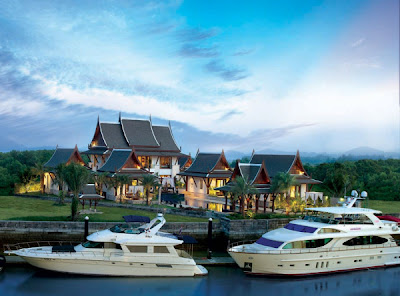 Way down in the south east of Thailand my worst fears have come true. Not only did the British contingent fail to appear at Manchester Airport but it seems that the American and antipodean emigrants also failed to follow travel instructions. Even Senor Brian from Catalonia created a jokey excuse for his non-appearance.

I headed for the Royal Phuket Marina where two luxury boats were already waiting to whisk us across the Andaman Sea to our new land. There was a champagne reception in the boathouse where guests would have been invited to receive soothing Thai massages after their long flights to South East Asia.

It's now near midnight Phuket time but still no one else has arrived so I have told Captain Joonpe to cancel the second boat. Again the sponsors won't be happy about this. So in half n hour or so, emigration to Blogland will begin but with only one lonesome traveller. I still feel excited but also a little sad.

Finally, I was going to get to meet legendary American blogger Robert Brague with whom I had been drawn in the first round of the arm wrestling competition. And there'd be Mountain Thyme and Libby, Rhodesy from Manchester and Johnny from Welsh Wales, Helen from Brisbane and Jan from Sunny California and everybody else. And we'd party on the social club terrace and drink copious amounts of Tetley's bitter and maybe I'd push Jenny in the pool just for fun and Mick would dive in to save her. Now all these dreams are evaporating into the tropical night.