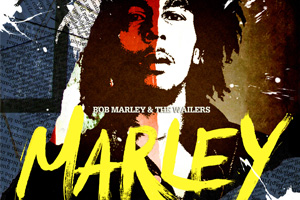 A full length documentary film is currently playing in British cinemas - all about the life of the legendary Jamaican music maker - Robert Nesta Marley (1945-1981). It's simply called "Marley". Yesterday I received a pirate copy and watched it on the big screen in the social club. Two and a half hours long, it was an intense watch.

You see the little shed in the impoverished inland hill parish of St Ann where Marley grew up with his mother, Cedella. Some time in 1944 she was impregnated by an English plantation overseer - Norval Marley who was considerably older than  Cedella. He died when Bob was just ten years old. That Bob was therefore of mixed race made him uncertain of natural allegiance. Perhaps he was of the world as much as he was of Jamaica.

Largely through interviews with Marley's musical associates and family members, the documentary follows his life to Trenchtown - the vibrant shanty district of Kingston. There he develops his musical and songwriting talents as well as embracing the Rastafarian religion with its somewhat bizarre focus upon Emperor Haile Selassie of Ethiopia. This diminutive and politically dubious figure even visited Jamaica in 1966 - greeted at the airport by many thousands of Rastafari and ordinary Jamaicans who literally mobbed his plane - such was the excitement and adulation.

Smoking ganja was not purely recreational. The notion was that it allowed Rastafari a closer connection with Jah - their God. Bob Marley smoked a lot of it but he also loved to play football at every opportunity.He was also sexually active - siring eleven children by seven different mothers. One day after a football game, his big toe hurt like hell and when he got it checked out he discovered he had a melanoma. This was to be the beginning of a four year journey to death but in the meantime he created most his finest music - playing huge concerts across the world including his triumphant "Uprising" shows at Madison Square Gardens.

From such humble origins, Bob Marley came to touch the world. It wasn't just about his music. There was something special about him - perhaps something spiritual. He seemed to embody the quest and the hope that is in all of us. Whereas so many ephemeral musical artistes have been obscured and forgotten by the passing of years, Bob Marley endures. I wish I'd seen him in concert:-
- April 26, 2012