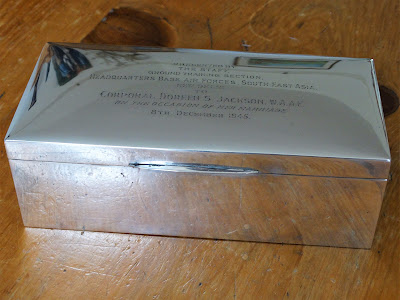 We all have possessions. Even hermits and Buddhist monks have possessions. One of my most cherished belongings is a silver cigarette box. It was given to my mother on her wedding day in New Delhi, India on December 8th 1945. My father was also present at this happy occasion.

The silver-plated box, lined with cedar, was made in Delhi - no doubt by an Indian craftsman. On the top of it the following words were engraved:-

From time to time I polish this box. Between polishings it becomes rather tarnished so it's nice to see the bright silver re-emerging. Today I polished it once again and reflected on the fact that my parents' wedding day was almost seventy two years ago. Dad was thirty one and Mum was twenty four.

World War II was over and it was almost time to return to England to resume civilian life. Fortunately, the Japanese never reached India but when my parents went out there as volunteers in The Royal Air Force, they had no idea what the next few years had in store for them. Like other young servicemen and women they did not know how the war would end.

They met and fell in love in Delhi. Mum worked in administration as the engraving on the box suggests. She was also the drum major of the Women's Auxiliary Air Force band. Dad was assigned to the meteorological department and in this role travelled throughout the Indian sub-continent.

I sincerely hope that this old silver cigarette box never ends up in a junk shop somewhere or sold for pocket money at a car boot sale. Instead, I hope that it is cherished by one of my children long after I have gone. 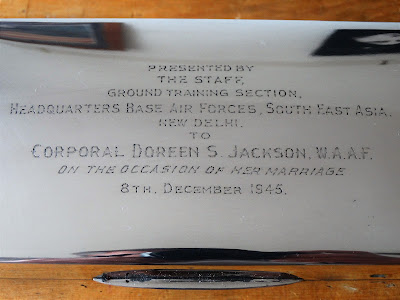