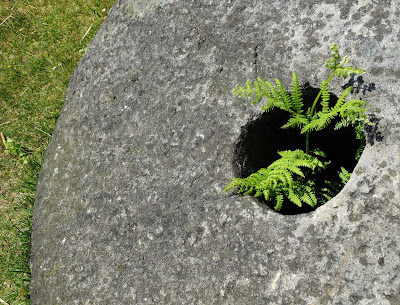 I have blogged about millstones before. For example, this was back in January 2014.

Yesterday, with my right knee feeling pretty comfortable I decided to go for a three mile hike near High Neb which is the highest section of Stanage Edge. The bracken is still very much in its early stages of growth so I knew that I would be able to find and photograph abandoned millstones quite easily. 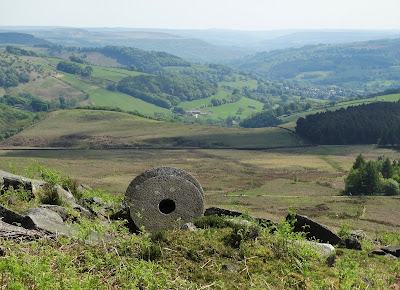 It was another lovely day - so hot in fact that I smeared my face with sun cream and donned the faded blue sun hat I bought in Malta a few years back. There were very few people around but I encountered a young German family - Mum, Dad and three children under five years old. The kiddies were struggling in the heat and one of them was crying in protest. I am sure they would have preferred a paddling pool in a park but of course Mum and Dad knew best. Poor little mites. 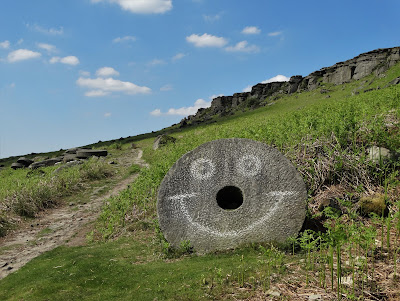 The millstones were used in both flour milling and metal industries. Lord knows how many of them were hewn from Stanage Edge biut in the early years of the twentieth century demand for Derbyshire millstones plummeted and  several small quarrying businesses closed down - often leaving finished or half-finished stones scattered near the rock faces which had spawned them.

They remain as monuments to past industry and a world that is now lost to us. More than twenty years ago someone painted a smiley face on one of the stones but I swear it wasn't me! He's still there smiling at passing ramblers and German families with tiny children, flushed red by struggling over rough terrain in the heat. 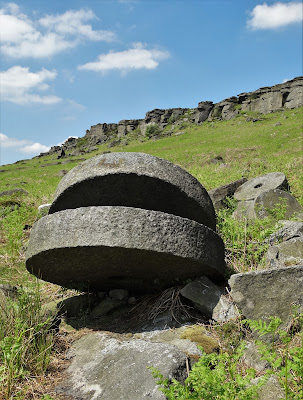 Later today we are heading down to London for a couple of nights. Back Monday evening.
- May 27, 2017