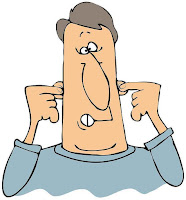 What's your hearing like? Normally, I think my hearing is pretty good. When lying in bed I hear every little sound both inside and outside our house. Inside, a tap drips downstairs or there's the unexpected creak of a contracting floorboard. Outside - a distant train rattles along far away in the valley or an owl hoots from a rooftop. I hear it all.

But there are other times when I think my hearing is rubbish. Take Sunday night for example. We were at a 60th birthday party held in former industrial premises. There were no carpets or curtains, just cool post-industrial chic - exposed brickwork and polished concrete.

We arrived early and sat at a bench with our drinks. It was okay at first. I could hear everything. Then the background music was cranked up and more and more people started arriving - most of them work colleagues from Shirley's health centre along with their better halves.

The hubbub of conversation might as well have been in Arabic as far as I was concerned. It was as if I was in a Moroccan marketplace subsumed by a wave of loud mumbling. Other people sat at our bench. I was introduced to them but for the life of me I couldn't hear their names or pretty much anything they were saying. There's only so many times you can say "Excuse me" or "I'm sorry could you repeat that?"

In this situation, after a short while, I tend to give up trying to communicate and just sit there listening to the din, wishing I was in a quiet place.

It has become very similar in my local pub. It was refurbished last year and now has no carpets, curtains or soft furniture. With music playing in the background and sports on the giant TV sets, customers tend to raise their voices in conversations - just to be heard.

This leaves me languishing in another virtual Moroccan marketplace, lost in  the impenetrable rumbling of congealing human voices. Fortunately, there are midweek nights when the pub is almost deserted but when it's busy I have to pretty much switch off simply because I cannot hear a bloody thing. And it's sad because in that pub I have had many happy times and participated in hundreds of lively conversations, lubricated by Tetley's bitter. But if you can't hear stuff, what then?