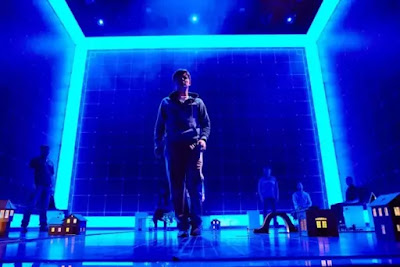 It's Friday but I mustn't let Monday go. Gotta nail it before the memory dissolves and other things take over like the impeachment of Donald Trump and Theresa May's vicarage sex scandal..

Shirley and I went to the theatre. In fact we went to "The Lyceum" in the centre of our adopted city. It is a beautiful and typical old Victorian theatre that has been restored to its former glory - complete with dress circle, upper circle, boxes and plenty of gilded plaster adornment.

But surprisingly, we weren't there to study the architecture. We were there to see a performance of  "The Curious Incident of The Dog in The Night-Time" based on the novel by Mark Haddon.

The stage had been turned into a kind of giant black and white electronic cube and it was in this that we examined the tortured life of young Christopher Boone played brilliantly and empathetically by Scott Reid. Christopher suffers from Asperger's syndrome and attends a special school even though he is mathematically gifted.

When he discovers that it was his father who had killed next door's dog - Wellington - with a garden fork, he decides to travel from his home in Swindon to London to seek out his estranged mother. You can imagine how challenging that might be for an autistic teenager.

The electronic box set comes into its own and effectively conveys the confusion of this journey - the motion of the train, the thronging crowds, the underground stations flashing by. It is a kind of madness from which a breathless Christopher is ejected on to his mother's doorstep.

Christopher struggles to understand things because the people around him don't see the world his way but he does understand mathematics and when he discovers he has passed A level Maths with flying colours the possibility of a path through the jungle of the future appears clearly in his mind.

The performance was greatly entertaining and in spite of the subject matter often very funny. "The Derbyshire Times" said it was "an intelligent, dazzling, humorous, moving show" and Shirley and I would certainly endorse that summary. 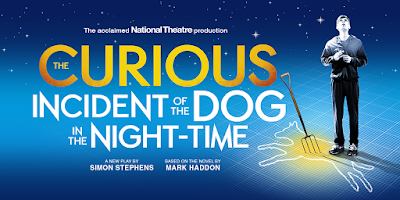