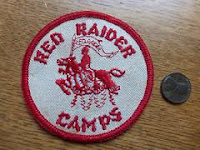 It was late in the month of May 1976 when I reached Cleveland, Ohio for the first time. I had travelled there from New York City by Greyhound bus and it was late. As I recall, The Cleveland Browns' Friday evening game had just finished and downtown Cleveland was snarled up with traffic. I phoned up my allocated summer camp and someone at the other end of the line told me I would have to get a room because nobody was available to drive into the city at that late hour to pick me up.

I asked a policeman where I might find a cheap room for the night and he directed me to the nearby YMCA. I crossed the threshold of this building around 10.30 and noticed that I was the only white man in the place. The other guests and the staff were all African-Americans and some of them seemed down on their luck with haunted eyes. Others appeared to have sampled alcoholic beverages.

Very tired after my long journey, I went straight up to my little room and looked down on the still thronging football traffic before clambering into  bed.

Dead to the world, I was awoken in the early hours by loud music and equally loud, drunken voices. Somebody hammered on my door but I just ignored it. Suddenly I felt a little frightened. It was as if I had entered something akin to a prison. The hammering continued as an angry someone yelled "You in there Mac?" I didn't want to reply in my non-American accent and soon the fellow outside went away chuntering madly. I jammed a chair against the door handle and pushed the table there too feeling apprehensive about going back to sleep.

In the morning a red mini-bus arrived from the summer camp and I was driven out into the nearby countryside. past Shaker Heights and Chagrin Falls, all the way to Novelty. It was the Saturday before camp opened for the summer and there were to be two days of training for counsellors.

Soon after arriving, I dumped my bags and headed into the sunny woodland where strange Ohioan birds sang and to much excitement someone spotted a big black snake lurking in the undergrowth. I was surrounded by young Americans and at first just sat on a log wondering what the hell I was doing there. What had I let myself in for?

It was called "The Red Raider Summer Camp" and it catered for children from the wealthy eastern suburbs of Cleveland. I had struck lucky because it was a day camp. Children were bussed in in the morning and taken home at night. There was no camp at the weekends. This made it different from many American summer camps which are residential and operate 24/7 throughout the summer.

A time-served head counsellor called Roman led the training. He told me I'd be the counsellor for The Wyandottes - a twenty strong group of  seven and eight year old boys.

I received my timetable for the week and I was directed to The Wyandottes' base amidst the trees. The boys would experience a mixture of set activities and free-time which I could use as I wished. The set activities included canoeing, tennis, soccer, horse-riding, swimming, art and campcraft which all had specialist counsellors.

Red Raider was a well-established summer camp that had operated since the nineteen forties. They knew what they were doing because they had catered successfully for thousands of rich kids from some of Cleveland's most influential families and many happy times had been enjoyed there in those long Ohioan summers.

Oh dear, I seem to have said so much in this preamble that I shall call a halt to the current blogpost and continue with the story tomorrow. But before I go who on earth is that dude in the white T-shirt? 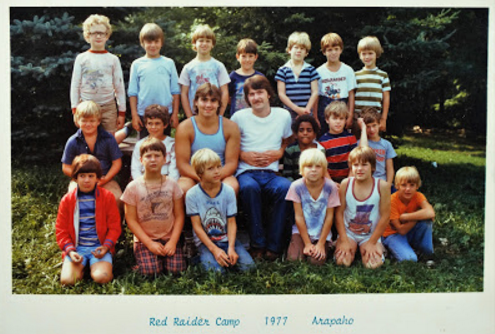