If you head westwards from The Hope Valley you will travel along the long straight road that clings to Rushup Edge and then after four miles you will arrive in a small Derbyshire town called Chapel-en-le-Frith - population circa 8,800.
Chapel-en-le-Frith is a very odd name. It dates back to Norman times when that area of Derbyshire was a vast hunting ground owned by the Norman nobility. In the twelfth century, permission was given for a small chapel to be built within the forest in the very place where the little town now stands. In fact "en-le-Frith" means "in the Forest".
On Thursday, I mooched around the place and ate a small portion of fish and chips in the Chapel Chippy. As my right knee was feeling quite comfortable I walked out of the town along a lane for a mile and a half to Eccles Pike which overlooks both Chapel-en-le-Frith and nearby Chinley. Then I walked back. Sadly, on Friday my knee complained about the previous day's exercise and the limping returned. 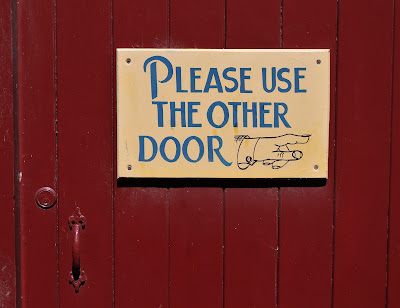 I met a grizzled farmer on the road to Eccles Pike and we chatted for a while. He described his anger about local dogwalkers who have allowed their animals to defecate on his land. Their faeces have infected several of his cows with neosporosis triggering several spontaneous abortions and the associated loss of income. That's why he had bedecked one of his gateways with a warning banner - close to the point where a public footpath crosses his land. 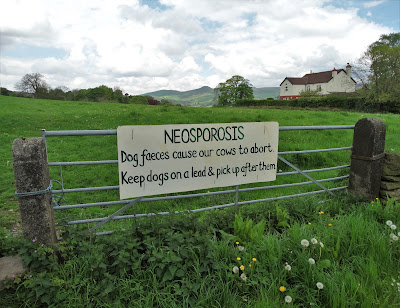