No - not windy in the sense that I had eaten a brussel sprout and baked bean curry, but windy in the other sense where an invisible force buffets you to a point where it nearly knocks you off your feet. That is how it was this afternoon as I rambled up on Derwent Edge in the Peak District.
Parking near Cutthroat Bridge, I followed the public right of way for a mile across heather clad moorland up to Whinstone Lee Fields. Here the wind was channelled and intensified to a point where I couldn't even hold my camera steady as my woollen Hull City AFC ski hat was whipped off my head. However, the view down to Ladybower reservoir was gorgeous:- 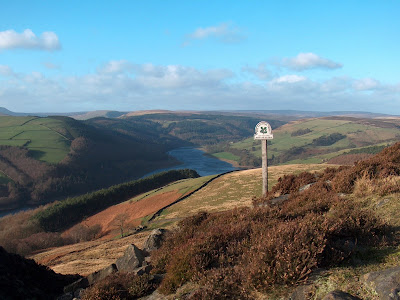 On Derwent Edge, the wind was piercing my ear cavities. Though the weatherman had promised a blue sky day with strong winds, there were grey clouds about - hurrying ever eastwards. One moment the millstone outcrop known as The Wheel Stones was in shadow and the next moment it was highlighted theatrically by late November sunshine:- 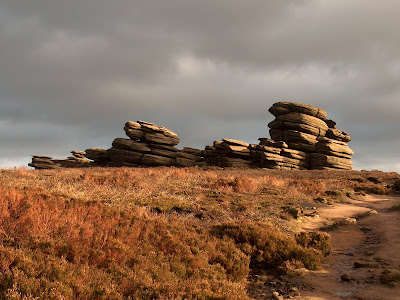 Onwards I strode along the windswept edge until I found my main goal: The Salt Cellar. Such a curious natural carving in millstone grit - shaped by millennia of strong winds and bitter winters. My picture fails to make it clear that The Salt Cellar is about twelve feet tall: 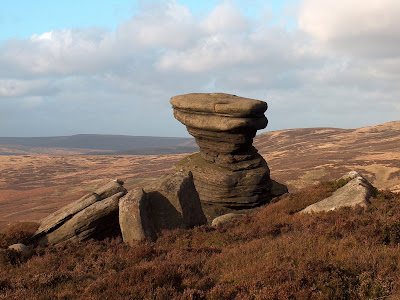 When walking on the moors of Derbyshire and South Yorkshire, ramblers will often disturb resting grouse. With their curious intermittent cries, they rise in panic from the heather and I have never managed to photograph that wing-flapping moment but today, before I returned to the car, I spotted this bold red grouse up wind of me:- 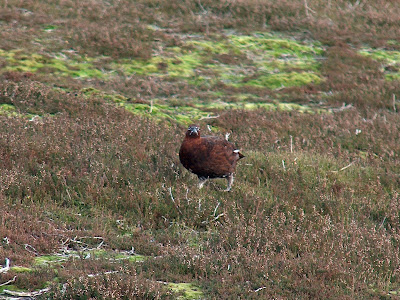 But all too soon he was gone like a feathered kite, riding the invisible gale.
- November 27, 2011