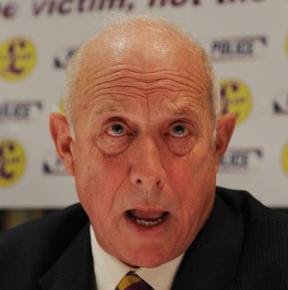 This is Godfrey Bloom, one of the MEP's for Yorkshire and Humberside. MEP means Member of the European Parliament. He earns around £90,000 a year before obscenely generous expenses and represents the United Kingdom Independence Party (UKIP). He looks rather like the TV actor Richard Wilson who famously played Victor Meldrew in "One Foot in the Grave".

Godfrey is a nice, old-fashioned English name which I have often wished  my parents might have given me. Then when playing football in the schoolyard, others boys would have yelled "Shoot God!" or "On me head, God!" etc. and at our family Sunday dinners my mother would have said "Fancy another Yorkshire pudding God?" God has a nice ring to it. Then I could genuinely have looked in the mirror, believing absolutely in the existence of God.

Anyway - back to Godfrey Bloom. He has been in the news this week because he made a controversial political speech in which he bewailed the very concept of foreign aid, questioning why Great Britain should send its hard-earned dosh to "Bongo Bongo Land".

Bongo Bongo Land? Where's that? Is it the Barra de Kwanza near Luanda in Angola or a smallholding close to Sloughhouse, California? Perhaps it's north of Atlanta in Georgia or on the north coast of Queensland, Australia. Maybe it's in a little village in North Wales or on the outskirts of Wrexham. Or could it be that Bongo Bongo Land is a mythical territory of the imagination like Eldorado, Shangri-la or Avalon? And do the residents plays bongos there?

Of course in a democracy, everybody is entitled to their opinions - Oswald Moseley, Benito Mussolini, The Iron Lady, Peter Sutcliffe, General Pinochet, David Icke, Adolf Hitler, Adrian's Images, Rupert Murdoch, Atila the Hun et al. Yes we are all entitled to our opinions - even Godfrey Bloom who has initiated such a deluge of debate that he may need to escape to his own Bongo Bongo Land where he will no doubt be feted by bare-breasted native ladies and carried aloft to his coconut palm palace as his grateful subjects chant "Long live God!"
- August 08, 2013