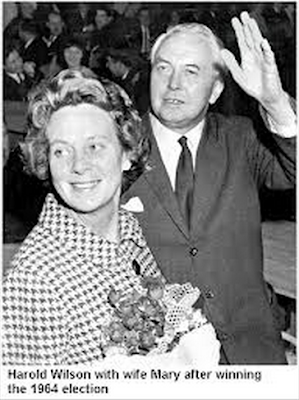 Brilliant Yorkshireman, Harold Wilson was born in Huddersfield in 1916. He died in London on May 24th 1995. He rose through the Labour Party's ranks to become Britain's Prime Minister in 1964. The left bewailed the moderate nature of his socialism and the right - represented by Fleet Street - sought to sully his reputation. There were persistent rumours about an affair with his private secretary Marcia Falkender but throughout it all his wife Mary - mother of his two sons - stood by him. Today he is something of a forgotten man but it is worth remembering that he was the PM in our swinging sixties - a time of significant social change and cultural awakening.

The Wilsons were especially fond of the Scilly Isles and frequently holidayed there. After Harold's death - from colon cancer - his body was taken back to the Scillies where he was buried on the island of St Mary's which perhaps surprisingly was not named after his wife. Mary is still alive as I write this post having achieved the ripe old age of ninety seven. An admired and acccomplished poet, she wrote this heartfelt verse in the weeks following her husband's funeral. It's why I chose to produce this particular blogpost:-

My love you have stumbled slowly
On the quiet way to death
And you lie where the wind blows strongly
With a salty spray on its breath
For this men of the island bore you
Down paths where the branches meet
And the only sounds were the crunching grind
Of the gravel beneath their feet
And the sighing slide of the ebbing tide
On the beach where the breakers meet. 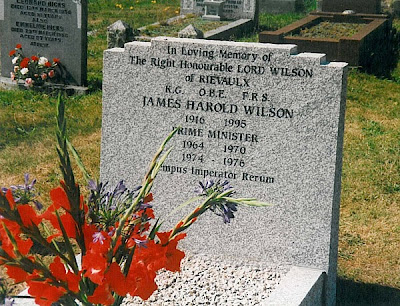 The Latin line on Harold Wilson's simple headstone is Tempus Imperator Rerum - Time the Commander of All Things.
- August 21, 2013