One place I would love to visit is the archipelago of St Kilda which lies forty one miles due west of Scotland's Outer Hebrides. The main island in the group is Hirta which is approximately 1,700 acres in area. It is an isolated treeless place battered by Atlantic storms though occasionally in the summertime the climate can be very benign. 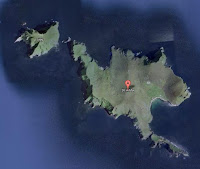 People lived on Hirta for perhaps five thousand years - some archaeological evidence certainly appears to confirm that. For the majority of those years the inhabitants lived in perfect isolation having very infrequent contact with other Scottish islands. They had to be self-sufficient and one of their main sources of food was seabirds and their eggs. Even today the islands accommodate enormous seabird colonies.

The nineteenth century saw more regular contact with the outer world. Curious Victorian travellers would come ashore - perhaps buying island knitwear or other hand-crafted souvenirs. With this regular contact, St Kildans came to question the way they lived and gradually islanders began to leave. Several ended up in Melbourne, Australia where their immigration is recalled in a suburb which still bears the name - St Kilda.
In recent centuries, the island's population  never surpassed two hundred but by 1930 only thirty six islanders remained and it was in that year they agreed to an evacuation that severed their ancestral links with St Kilda.

Margaret - a woman who occasionally visits my local pub - went to St Kilda in the mid-nineteen seventies. She's the sort of person who enjoys visiting wild places. The idea of a holiday in Las Vegas or Blackpool would utterly appal her. She remembers St Kilda with much affection - its isolation, its rugged beauty and the echoes of past times. They say that the St Kildans were the very last people in the British Isles to exist principally by hunting. The fortnight Margaret spent there still occupies a special place in her memory bank.
It makes you wonder - what was life like for those people. How did they rub along together all those years? And why did they go there in the first place? What was it that drew them there? From the sixteenth century, the islanders had annual rents to pay to one of the landowning lords of Skye. Why? How was he able to claim possession of St Kilda? There are lots of questions and it is likely that most of them will never be answered.

I may never reach there. It isn't easy to get to St Kilda and sometimes, when the boats arrive, rough seas make landing impossible. Margaret's husband - Ron - has tried unsuccessfully to land there three times. Shirley is interested in going too. It's nice to dream. We'll see. The National Trust have refurbished half a dozen of the old cottages so there's somewhere dry to sleep. One day perhaps.
There's an excellent National Trust for Scotland website devoted to St Klda. If you'd like to find out more please go here.
- August 05, 2013