In the middle of Barker's Pool stands Sheffield's  unusual war memorial. It is a flag pole with the bronze statues of four soldiers at its base. Their heads are bowed. This year more citizens than usual assembled to show their respect for our war dead and to remember them at eleven o'clock on the eleventh day of the eleventh month - Armistice Day. There was an unbroken two minute silence and we knew as we stood there that that silence was being replicated at thousands of memorials around the country - from St Agnes to Skaw and from Belleek to Lowestoft.

And I thought of my paternal and maternal grandfathers - two men who didn't know each other but both fought at The Battle of the Somme. What things they must have witnessed! But like most who went to The Great War, they came home. In a sense, they are the forgotten ones. They do not belong to "The Glorious Dead" and I was thinking of them as I wrote this poem within the last hour...
______________________________________ 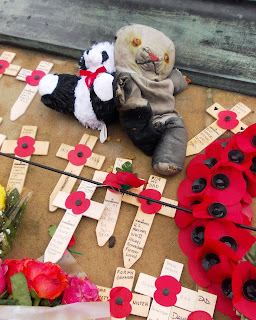 For all the boys who came home
To those who could not weep
And those who could not sleep
Who trembled in dark bedrooms
Wincing at their demons
Their secret shame
Who yelled unreasonably at their kids
Fought  their frightened wives
Drank hard
Or retreated deep into themselves
Lost in no man's land alone
Who still heard the booming
Still smelled the awful gas
Shivered yet
In knee-deep mud
Twenty years past
Or thirty or more
Their names uncarved in Portland stone
We also give our thanks to you
The lucky ones
The boys who quietly came home.
- November 11, 2014