Turn the clock back eight or nine years, maybe ten. I am a senior teacher in a tough urban secondary school and Head of the English Department but a buzzword that has begun to creep into our vocabulary is "leadership". We are no longer educators but warriors in the battle for educational progress. There must be leaders, strategists who can direct the troops and win the endless war on ignorance or more accurately improve the school's alarming GCSE results.

No longer do we have fortnightly Heads of Department Meetings, now we have weekly Leadership Team Meetings. There's a new broom in the building - a headteacher with coiffured hair, sunken eyes and manic laughter. The waxy skin of her hands is paper thin and you can see the blue veins beneath like back roads on a county map . They throb as her blood returns to what is undoubtedly a wooden heart.

Along with the other Heads of Department - sorry - Leaders - I raise my eyebrows when Her Royal Majesty sets us a task for next week. We must bring in an object that somehow represents us - something we can speak to. Of course, we leaders must know each other better and then the school will be better led and our exam results will rise magically like mighty oaks from the council estate we can see through a ten foot high security fence. Was there really any need for the razor wire on top?

Days go by. What the hell shall I bring to the party? My Hull City shirt signed by Ken Wagstaff? My guitar? A framed family photograph? I really didn't want to make it too personal and yet I was obliged to play the stupid game. Somehow. And then I had a bright idea.

I recall that we were all a bit puzzled and disappointed by the object that She Who Must Be Obeyed brought in to kick off proceedings. It was a wooden roller with little blunt spikes on it. Such instruments may be used in massage and her husband had brought it back as a present from Thailand where he had enjoyed several "holidays". By the way, a year or two later we learnt that some of these "holidays" involved seedy romps with underprivileged young Thai women.

We went around the room. There was a tin whistle, an old copy of "Tom Sawyer", some framed family photos and a miniature painting of a white dog called Arthur. The accompanying chat taught me a great deal about my fellow leaders. I now saw them as rounded human beings and appreciated a little more of where they were coming from. Didn't I? Actually no.

But now it was my turn! Gulp! I delved into my trusty canvas school bag and pulled out... 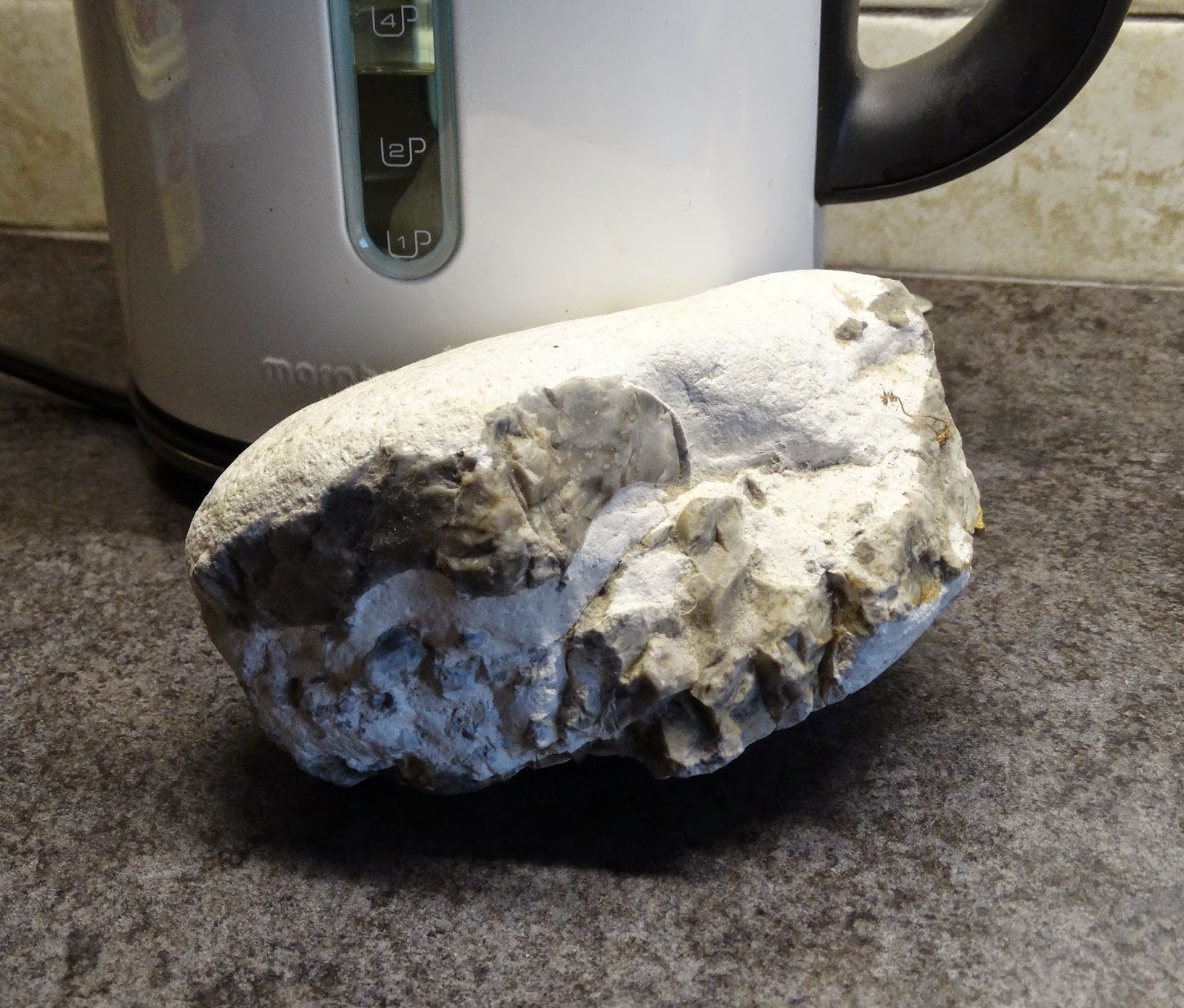 I had picked it up a few years earlier from the base of Flamborough Head - when the North Sea tide was out and I had crept under the overhanging cliff - into a shallow sea cave. The rock is composed of two materials that geologically speaking will often sit side by side - chalk and flint. They are melded together in that stone as they have been for about a hundred million years.

To the flabbergasted Leadership Team, I spoke of the spine of Yorkshire and of Yorkshire values - the softness of the chalk and the hardness of the flint. I told of my East Yorkshire upbringing, embraced by the same chalky wolds that meet the sea at Flamborough and I referred to the importance of knowing what lies beneath the surface - what is true and lasting. It would have been possible to get a lot more words and ideas from that humble rock. Perhaps metaphors for life and education. Perhaps idle bullshit. It depends how you prefer to look at things.

Anyway, I look back and feel rather proud of my choice of revelatory object for that Leadership Team meeting. Pleased too that I didn't bring in a wooden massage roller. I wonder what the latest buzzwords are  in education now that most state schools have been bullied into becoming self-governing "academies" - an idea which deserves to be crushed with  fist-sized rocks.
- November 30, 2014