There's a big arc of chalk to the east of England. It rises gracefully above the surrounding flat lands as it curls from the white cliffs of Flamborough Head, embracing the Plain of Holderness, plunging under the River Humber and then curving southwards through the heart of Lincolnshire towards The Wash. We call these gentle chalk downs The Wolds. North of the Humber they are The Yorkshire Wolds and south of it they are - can you guess - yes - The Lincolnshire Wolds.

Can you imagine what the landscape of England was like before we were invaded by Romans and Vikings and then Normans? The population would have been much lower than today - less than one million. The flat lands of eastern England would have been undrained and marshy with reed beds and forests and rivers that simply spread out because there were no artificial  banks. One of the best locations for settlements would have been chalky downs like The Wolds. They drained naturally and allowed views of the surrounding flatlands. It would have been a good place to graze animals and raise crops, a good place to live and feel safe. 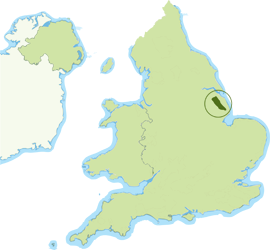 There were many small settlements up on the Lincolnshire Wolds but new approaches to farming in the Middle Ages began to change the landscape. The flatlands were being drained and their silty soils now offered greater fertility and better opportunities for successful sustenance. People began to move down from the Wolds. Sheep moved in. Today many of those original woldland settlements can only be seen in aerial photographs but on the margins various small villages remain and they can trace their origins way back in time.

On Thursday, I caught a train to Barnetby-le-Wold and undertook a long walk in the north western sector of the Lincolnshire Wolds. Five solid hours of plodding. Sadly, the sunshine that had been promised by the weatherman on Tuesday never materialised but at least it was dry and perhaps typically Novemberish - slightly chilly with thin white cloud and a mist that never fully disappeared.
I walked from Barnetby to its abandoned Saxon church on the edge of the village before striking out to Bigby, then Somerby and Searby. The -by ending of place names is Viking in origin and this ending is predominantly restricted to Yorkshire and northern Lincolnshire. There are 171 settlements in Lincolnshire ending in -by.

Up to Searby Top where the fields are still speckled with bits of chalk and flint, then along to Mealand Hill and down to New Barnetby. I was back in Barnetby-le-Wold just before my train arrived at 15.53. It had been a wonderful walk even though the light was not conducive to stunning photography. It is hard to fully comprehend that those chalky wolds were once the floor of a prehistoric ocean that existed for an estimated 80 million years during The Cretaceous Period which drew to a close some seventy million years ago. Such mind-boggling periods of time.
- November 22, 2014