On Wednesday afternoon, I went to The Showroom to see "Mr Turner" directed by Mike Leigh. It's about the last thirty years of the great English Romantic landscape painter and water colourist - Joseph Mallord William Turner.

Born in Covent Garden London in 1775, Turner died in Chelsea in 1851. His father was a barber and wigmaker while his mother appears to have lost her mind after the death of Turner's sister and was committed to an asylum where she died years later.

The film does not set out to be an accurate biopic. It is a drama - an entertainment which draws on some of the things that are known or rumoured about Turner's life. The great artist is played by English character actor Timothy Spall who was asked by Mike Leigh to take up painting two years before filming of "Mr Turner" began. Spall is brilliant in this role. Rough and ready and somewhat piggish in his habits, he grunts and groans, spits at his paintings and rogers his housekeeper but throughout it all he reveals an all-consuming passion for his art. 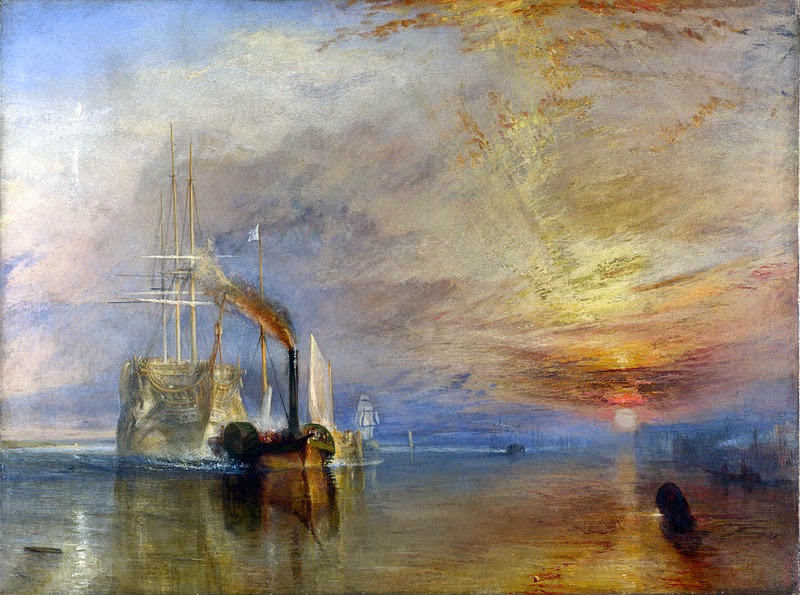 We see several cinematic images of scenes that inspired some of Turner's best paintings such as " The Fighting Temeraire" (see above) - a warship that was broken up in 1839. This famous painting now resides in the National Gallery by Trafalgar Square.

Mike Leigh's portrayal of London and Margate in the first half of the nineteenth century is earthy and believable. People laugh and they fart. There are rotten teeth and thronging streets. Their clothes are not borrowed from the ITV costumes department - as if previously worn by the cast of "Downton Abbey" - they are lived in, and sometimes ill-fitting. Spall threatens to burst out of his waistcoat like Mr Creosote in "The Meaning of Life". At the Royal Academy - of which Turner was a tolerated member - there is snobbery and spitefulness, mocking laughter and pretence.

We get cameo appearances from Queen Victoria, John Constable, John Ruskin and other key figures from London life during those times but the film's focus is of course mainly upon J.M.W.Turner. We watch him being strapped to a ship's mast in order to experience a storm at sea and we witness his coughing and wheezing as he grows older and then dies before our eyes.

It is an unusual, fascinating and authentic film. One which I very much enjoyed and yet, and yet - perhaps it was because of the mood I was in - I felt that there was something missing and for the life of me I can't put my finger on it. It was really, really good but not quite in the category reserved for the great.
- November 14, 2014