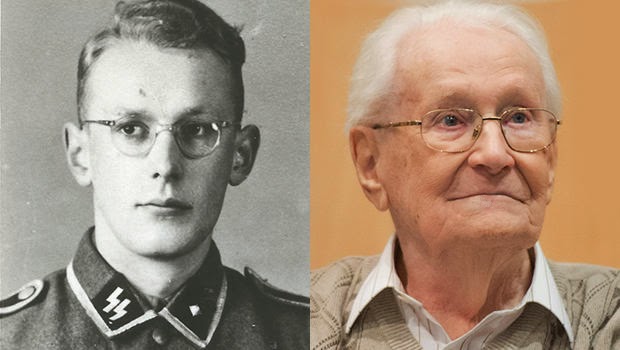 Oskar Groening worked at Auschwitz. You may have heard of that awful place. Jews were brought there on goods trains for extermination. Oskar  was just twenty one when he arrived at the death camp. He was assigned a clerical position and as a Nazi bureaucrat, he had the job of logging details of the currency that Jewish prisoners brought to Auschwitz.

He was not directly involved in the killing. As he once said,, he had a "desk job" and yet he currently finds himself, at the age of ninety three, facing justice in a court of law charged with being an accessory to the deaths of 300,000 people.

In fairly recent years Oskar Groening spoke out with shame about what he witnessed at Auschwitz. For example, he recalled a particularly terrible incident that had haunted him for sixty years:-
"...a baby crying. The child was lying on the ramp, wrapped in rags. A mother had left it behind, perhaps because she knew that women with infants were sent to the gas chambers immediately. I saw another SS soldier grab the baby by the legs. The crying had bothered him. He smashed the baby's head against the iron side of a truck until it was silent."

Remember, Oskar Groening was just twenty one when he was sent to Auschwitz. Little more than a boy. In my view, he himself was a victim of the Nazi regime. Like so many young Germans he was caught up in the tide of war. He did not start the war or plan the extermination of Jews. He was just a little cog in the processes of Nazi horror.

I think it's so wrong that this old man now finds himself in a court of law. It isn't justice, it's a legal witch hunt when a line should have been drawn under what happened at Auschwitz a long time ago. He was just a pawn and as in any game of chess, it's the back row you really need to get at and those evil men are already dead. What merit is there in pursuing Oskar? Forgive and forget.
- April 26, 2015