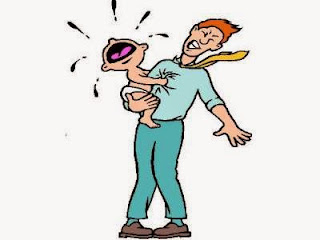 Growing up in my East Yorkshire village, I was economically disadvantaged in comparison with my teenage peers. At fifteen, nearly all of them were working - on apprenticeships or otherwise employed. They had money in their pockets having truly entered the adult world. On the other hand, I was still at school, stumbling along in the sixth form to my A level exams. I had little money.

So for about three years I became a regular babysitter. It was very easy "work". The wives left me food and drink, the children rarely woke up and I could either watch TV or get on with some homework task.

At one house there were two little girls and in all the dozens of times I undertook babysitting duties there I don't think they ever woke up. At another house, there was a little boy with a brilliant first name - Neil. Once in a while he sneaked downstairs and sat on my knee while I read him a bedtime story. Like all Neils, he was a delightful child.

Years later, that same little boy had become a strapping young man and was working as an aviation technician with the Royal Airforce. He approached me unexpectedly in a pub, so pleased to see me though at first I had no idea who he was. Touchingly, he remembered those babysitting nights with great affection, sitting on my knee sharing stories..

In those now far off days there were no mobile phones so when the parents left the house there was no way I could get in touch with them. Furthermore, in those days of yore most of us knew nothing about paedophilia. It just wasn't on our radar. So the parents who employed me as a babysitter had no worries about leaving their precious offspring in the care of a hormone-fuelled teenage lad.

Nowadays, I am very conscious of sensitivities surrounding child abuse. I have seen it in people's eyes. They don't have to say a word. Yesterday I was near a primary school in north east Derbyshire just as the children were leaving and there were several parents waiting around. As I walked by, I studiously avoided eye contact with any of the children. It's too risky to do otherwise even though the prevalence of child abuse in our society has been massively exaggerated. Ninety nine per cent of men are disgusted by the idea of paedophilia and mean absolutely no harm to any children they encounter.

Tomorrow evening I will be babysitting again for a thirty something mother who lives across the road from us. She has two delightful little girls and a not so delightful absent husband who is in the final stages of divorcing her in favour of a German dominatrix he met on a business trip to the state of Baden-Württemberg in Deutschland. No doubt Cath will give me her mobile number and though she knows me quite well, I am pretty sure that the spectre of child abuse will have fluttered briefly on her mind's screen. That's how it is these days.
- May 20, 2015