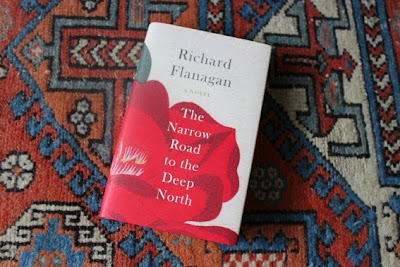 Since I took early retirement from the wonderful world of secondary school teaching, I haven't read half as much as I imagined I would. There have been oodles of spare time and in that sense no real excuse for not reading. But often I just haven't been in the mood for it.

It has taken a good while to do but I have just finished reading "The Narrow Road to The Deep North" by Richard Flanagan. It was the winner of last year's prestigious Man Booker Prize.

The book tells the story of Dorrigo Evans, an Australian doctor haunted partly by a wartime love affair with his uncle's wife but mostly by his awful experiences in the jungles of western Thailand where he was involved with hundreds of other prisoners of war in the construction of the infamous Thai-Burma railway. Post war, he finds his growing celebrity as a war hero at odds with his sense of his own failings and guilt.
Taking its title from  a seventeenth century haiku by Japanese poet Matsuo Bashō, the novel is epic in form and chronicles an Australian century,  encompassing the post war lives of Japanese and Korean prison guards as well as Australian prisoners of war. Flanagan explores the effects of war, considers various forms of love and  ultimately investigates what it means to be a human being caught up in the worst terrors of warfare and self-doubt.

It is a very well-written novel and perhaps it's my own fault that I found Dorrigo Evans a hard character to like or even to believe in. There are really gripping passages about prison camp experience but sometimes I found the text unnecessarily verbose. arguably self-indulgent and occasionally frustrating as it switched from past to future and back again.

Nevertheless, I am glad that I chose to read it. When I was in Thailand I visited the remains of the Burma railway, walked upon the new Bridge on the River Kwai, paid homage to the dead at the military cemetery in Kanchanaburi and visited the Hellfire Pass Memorial Museum near a cutting that was hewn from bare rock by malnourished prisoners of war - many of them unfortunate Australians. It was an extremely dark chapter in the history of the twentieth century and another terrible reminder of the wickedness that war will so often bring to the surface.
- May 14, 2015