Back in 1997 when Tony Blair became our prime minister, I was delighted. It meant an end to Conservative rule under Thatcher and Major and the possibility that the British state would once again adopt a kinder approach to the poor, the needy and the downtrodden and a more imaginative approach to commerce and industry. No more "I'm alright Jack - pull up the ladder".

The next few years were good. The ship of state did indeed appear to have changed course. "The Troubles" in Northern Ireland were soothed, a massive programme for the building of new schools and hospitals commenced and in  general people seemed a lot more optimistic than they had done under the "no such thing as society" Tories. We were perhaps in Cool Britannia.

But then those aeroplanes hit The World Trade Centre in New York and everything changed. Anxious to remain best buddies with America, Blair was drawn into vengeful and highly questionable military adventures in both Iraq and Afghanistan. It wouldn't have been too bad if he had parachuted in on his own wearing a helmet and a khaki flak jacket but leaders so rarely go to war themselves do they? They just view warfare from afar as other people's sons die.

All that killing. All that misery. All that harvesting of bitterness. The British people had made it very clear to Blair that we didn't want our forces to go into Iraq or Afghanistan but he ignored our protests. He ate barbecued meat at George W. Bush's Texas ranch where no doubt he strummed a guitar and sang, "Home, home on the range" as Dubya, in his barbecuing apron, drank a six pack of "Rolling Rock".

It was around that time that I changed my opinion of Tony Blair and began to see him for what he has become - a messianic, unapologetic, self-absorbed, contradictory Catholic convert who has developed dangerous addictions to both wealth and the intoxicating smell of power. He is now as far away from socialism as his £8 million Grade II-listed Georgian townhouse in West London is from Mount Buggery in Australia.

Nowadays, Blair often charges £250,000 a time for public speaking jobs - nine times the average annual salary and heaven knows how much he earned as the blundering United Nations Middle East peace envoy for eight unfruitful years. As "The Independent" said when he resigned from this lucrative post in May of this year - "Only Israel will miss him".

Blair was born in the same year as me but unlike him, I am unable to buy London homes for my children. Blair bought his three older children homes that cost £1.35 million, £3.62 million and £1.2 million. So much for learning the life lesson that you have to work for what you get. Blair and his scatty wife Cherie own several other properties and it is widely estimated that their combined fortune is around £100 million though naturally Blair would dispute this with his habitual weasel words.

As regular visitors to this blog may recall, I am a lifelong atheist - having "seen the light" when I was a child. On the other hand Christianity has apparently played a big role in Blair's life. He agonised for years about converting to The Church of Rome and made that leap in 2007.

In addition to his appetite for money, Catholicism has become his guiding light. For example here he is at a conference in Rimini, Italy  in 2009:- "In seeking this path of truth, lit by God's love and paved by God's grace, the church can be the insistent spiritual voice that makes globalisation our servant, not our master."

And now I reach the notion that sparked this blogpost in the first place. Isn't religion supposed to be about goodness, love of one's fellow man, humility, recognising that personal wealth is a false and dangerous idol, living a decent life - things like that? As Tony Blair travels between his luxurious Buckinghamshire mansion and his equally luxurious London townhouse, as he refuses to apologise about the killing he helped to unleash in Iraq, as he leaves Labour's core values way behind him, as he signs copies of his odious autobiography "A Journey", does he ever stop to consider that it is all at odds with his purported Christian beliefs - his starry-eyed Catholicism? Personally, I very much doubt it. 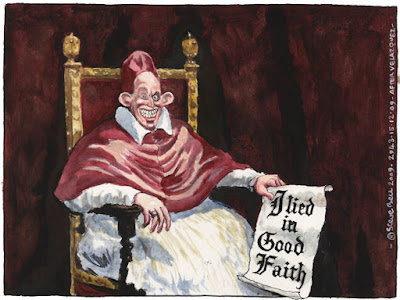