My itinerant blogging correspondent, Professor Adrian Ward of no fixed abode is currently snowed in in the wilds of eastern Scotland. But please do not worry about his welfare for he has plenty of emergency supplies on board  Old Sheila - his trusty vintage camper van. For example, he has a case of "Teacher's" blended scotch whisky, several pouches of Old Virginia baccy and seventeen pot noodles (chicken flavour). His faithful "trained to kill" security dogs - Alf and Murderous Molly also have plenty of food in reserve including the carcass of a  young stag which they hauled home before the snows came down.

As visitors to "Adrian's Images" will already be aware, Professor Adrian is like a travelling version of Magnus Pike - bursting with knowledge and enthusiasm about photography and new methods of image enhancement. Occasionally, he throws out tidbits of photographic advice to we mere mortals and just the other day he directed us to some software that even an idiot like me could play around with in spite of my prehensile knuckles.

Below there's an altered image drawn from a photo I snapped last Wednesday in Sheffield's Endcliffe Park. It is of the plinth of the obelisk that the city erected to commemorate Queen Victoria's jubilee in 1887. Knowing that Professor Adrian is a devoted royalist, I naturally dedicate this first picture to him:- 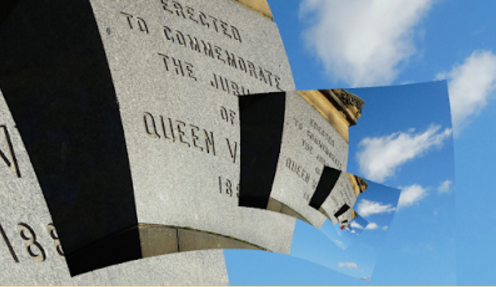 Afterwards, I lifted Professor Adrian's profile image and put it through the software wringer to produce the following almost hallucinogenic picture:- 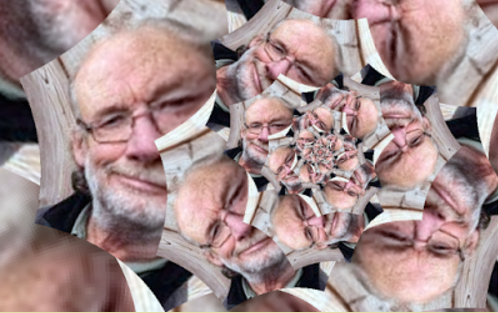 I have already been approached by a couple of leading wallpaper manufacturers who are keen to use this design in a new mind-boggling range that will certainly enhance any home. To market the product they plan to plaster Professor Adrian's camper van with the exclusive new wall covering and confidently expect to sign him up to star in a sequence of teatime television commercials.

If you would like to order half a dozen pre-launch "L'Adrianesque"rolls please send me your delivery address and credit card details including pin number and security code. In the meantime I shall shout out a huge public "thank you" to Professor Adrian for directing me towards my first entrepreneurial million. What would the French call it I wonder?
- November 29, 2015