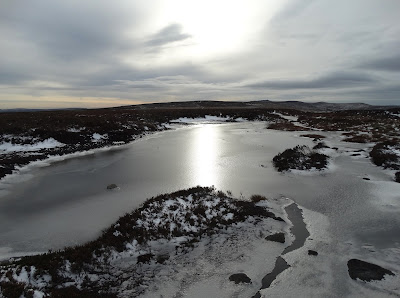 Yet again I was out on the frosty moors but still within Sheffield's metropolitan boundaries. I parked by Mortimer Road west of Bradfield and then headed westwards. My route took me along a track that the Duke of Norfolk had built in the nineteenth century to access some of the best grouse shooting territory in England. Not the sport of kings but the sport of toffs. In fact where is the sport or the fun in blasting plump, frightened moorland birds to smithereens? Ho-ho that's twelve I've bagged today your lordship! Jolly good show old chap! 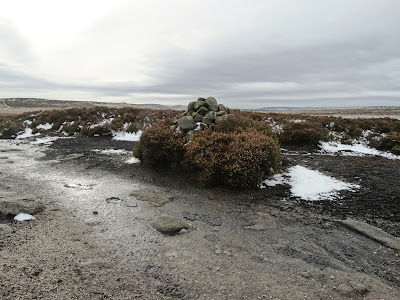 It was bitterly cold so I was thankful that my Hull City beanie hat was in my "Converse" rucksack with a pair of fingerless gloves too. Wearing  lined walking trousers was another a good idea. The peaty ground was frozen hard in places but elsewhere ice-topped puddles were traps for optimists. I tiptoed around them. 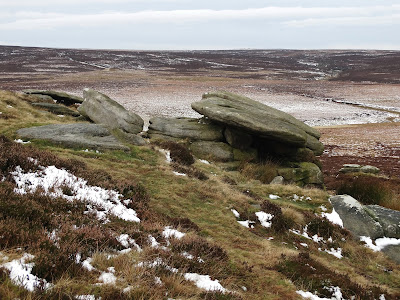 All morning, I only saw one other person - a fell runner in a blue tracksuit and woolly headband. "Morning!" we both said in the middle of nowhere. He was heading back to Mortimer Road and I was on my way across Cartledge Flat - all peat, heather and moorland puddles and very hard to read from a map.

Then down past a line of grouse butts and across the devastated remains of a former conifer plantation. Luckily there were no gunmen around - just the cackling of surprised grouse rising up from the heather, no doubt relieved to discover that not all human beings want to blast them out of the sky.
Soon I was back on Mortimer Road with a three mile trudge ahead of me back to the car and at last, after four hours,  a welcome sit down.
- November 24, 2015