Don't worry. No more ranting about retired politicians today. Instead let me take you ten miles west of Sheffield to The Upper Derwent Valley. Until 1902 it was a peaceful cleft in the earth with moorland streams running down into the babbling River Derwent as it began its winding journey towards the city of Derby. There was a handful of  sheep farms and two tiny villages - Derwent and Ashopton but their remains are now hidden from view under three large reservoirs - Howden, Upper Derwent and Ladybower.

The construction of the reservoirs with their three sturdy dams took over forty years. It was a massive engineering project, punctuated by two world wars and the economic slump of the nineteen thirties, But finally on September 25th 1945, King George VI planted an oak tree near the head of Howden Reservoir to mark the completion of the work.

In the early years of work in the valley a temporary labourers' village was built near Birchinlee Farm and it was known locally as "Tin Town" for obvious reasons. Very little of that encampment remains but one of the tin huts was dismantled in the nineteen thirties and transported to the village of Hope where it is still used as a hairdressers' salon to this day.
On Monday I woke to bright sunshine even though the radio announcers were talking about widespread fog around the country with many flight cancellations and chaotic motorways. After my morning shower, mug of tea and toast with honey,  I was off in my car - westwards to the Upper Derwent Valley on the A57 road which crosses the Ashopton viaduct over Ladybower Reservoir. There was cloud in the valley and soon after I had turned right to travel north to Howden Reservoir, I  just had to stop to take this picture looking back at the viaduct:- 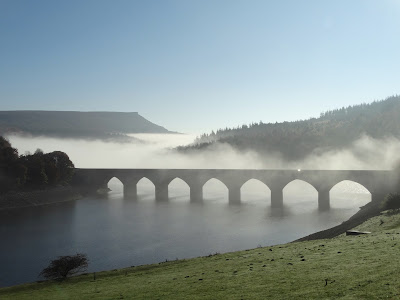 I completed two walks that day. The shorter first walk saw me scrambling like a commando through thick pine forest, fields of bracken and clinging brambles over barbed wire fences, knowing that if I fell nobody would find me for months on end. The second, much longer, walk took me along the River Westend and up on to the windswept moors which lie west of the Upper Derwent Valley. They are the haunt of grouse and blackface sheep. Up on the top the November sunshine was warm upon my skin and so I was pleased that I had chosen to leave my jacket in the car. But down below the Westend Valley was rapidly being plunged into shadowy darkness. It was time to head home.
- November 04, 2015