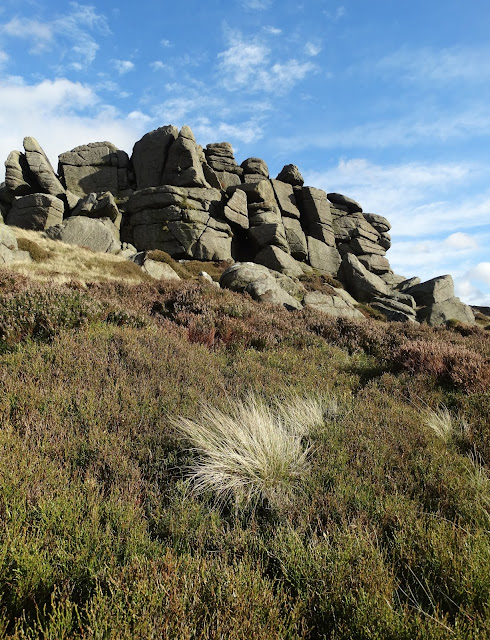 A lonely walk in a forbidding landscape. No other human beings in view. There on the high moors between Sheffield and Manchester the land is like an enormous sponge. Peaty and black with rough grasses, heather and slow moving  rivulets. It is an ancient and delicate ecology.

Occasionally there are rocky outcrops but to reach some of them you must tiptoe across boggy land, leaping between puddles, wondering if the black peat will be firm or soft and greedy - ready to swallow your boot. The picture above is of the little visited outcrop at Bull Clough Head and below a smaller outcrop thirty yards higher up. To me they are magnificent natural sculptures. They have existed for thousands of years and will remain for countless more after we have all gone. 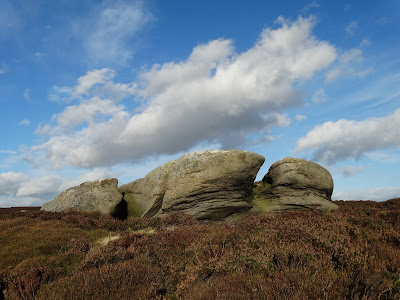 Throughout Great Britain there are triangulation pillars, erected by The Ordnance Survey. You find them in the most surprising locations and they have been of great service in the accurate mapping of these islands. They cam also be useful landmarks for walkers and I was very happy to spot this one on The Outer Edge. It gave me my bearings. 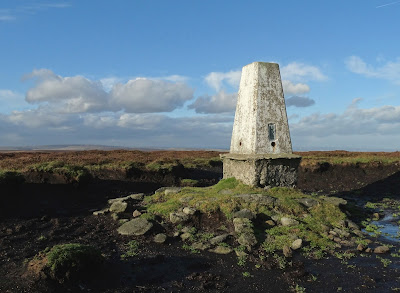 My only companion on this wild walk was the wind. Down in the valley, it had taken the form of a gentle breeze but up here it threatened to blow me off my feet and as I walked past Margery Hill on to Wilfrey Edge I was stumbling like a drunkard. It slapped my cheeks and mercilessly ruffled my hair but you cannot see it for the wind stays invisible in still photographs. On Howden Edge I arrived at High Stones which at 548 metres above sea level is the highest point in South Yorkshire. There's a small cairn there as you can see below:- 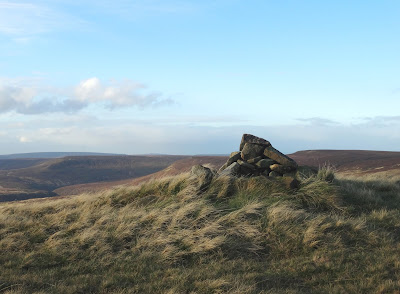 Leaving Howden Edge I reached a rough farm track that descends to The Derwent Valley and saw the silvery reflection of the late afternoon sky caught in a puddle. 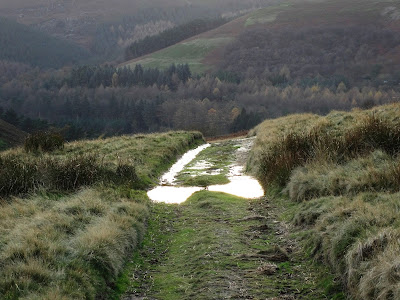 Day was dying and a crescent moon was already shining when I got back to my car at the end of Howden Reservoir. A young farmer with a bright-eyed sheepdog was loading a section of his flock into a trailer. I asked him why and he said he was taking them back to the farm for "tupping". There they would remain to be serviced by his best ram before being returned to the hills on Christmas Eve with baby lambs growing secretly in their bellies.
- November 17, 2015