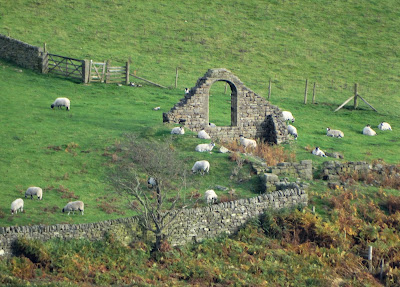 On Friday afternoon, as I was rambling near Stanage Edge, I looked down into the North Lees Valley from Bole Hill and zoomed my camera in upon the ruin you can see in the picture above. It is all that remains of an old Roman Catholic building called Holy Trinity Chapel. Long ago it served nearby North Lees Hall and was built, like numerous English churches, close to a holy "well" or spring that was venerated for hundreds of years before Christianity appeared on the scene.

Yesterday (Saturday), I decided to make a closer investigation of the chapel site. Shirley came with me instead of going shopping in the city centre. It is only ten minutes by car from our house to North Lees. We parked up near Bronte Cottage and headed north for a few hundred yards. 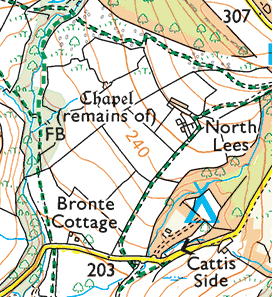 Sheep were grazing around the chapel, ignorant of its history but co-incidentally, as we were mooching around the ruin, a young farmer from North Lees Farm appeared at the top of his field with a sheepdog. The flock of a hundred or more were quickly rounded up and moved on to a higher pasture, leaving the old chapel to us.

Naturally, I snapped several photographs and later used the internet to research the site.

A lot of mystery surrounds it but it is thought to have been built in the fifteenth century. Its destruction - possibly in 1688 - may well have been a symptom of continuing antagonism towards The Roman Catholic religion and its influence on British life. This is essentially what The Gunpowder Plot of 1605 had been all about and there are hundreds of other examples of violent rebellion against a religion that had once dominated virtually all aspects of British society since the time of William the Conqueror whose invasion of England in 1066 had been sanctioned by Pope Alexander II. 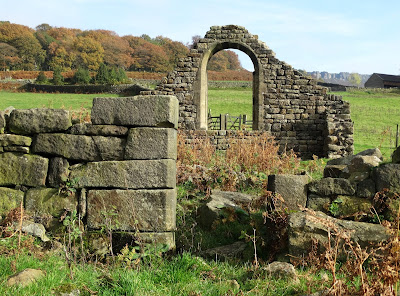 There isn't a lot to see at the ruinous site of Holy Trinity Chapel. The destruction was pretty comprehensive but the place remains evocative in its lovely, remote setting. You sense the presence of those who once knelt here and if you close your eyes you might hear the sound of their papish prayers. Opening your eyes once more, you might wonder about the fury that once drove men to destroy churches, great abbeys and even little field chapels like Holy Trinity. And if they could do that to buildings what were they doing to their Catholic cousins?

Religion had and still has a lot to answer for. So much anger. So much killing. And all this from people who purport to subscribe to holy creeds that champion love, tolerance and prayer. 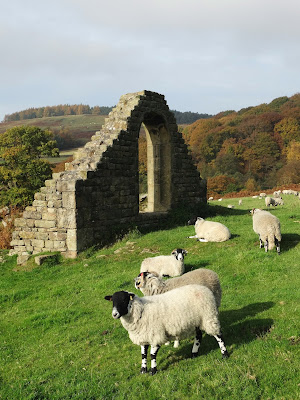 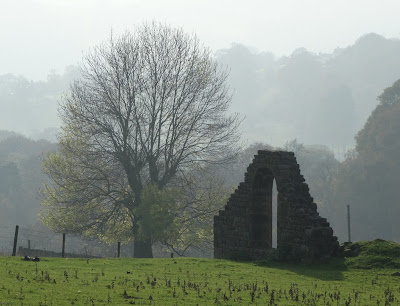 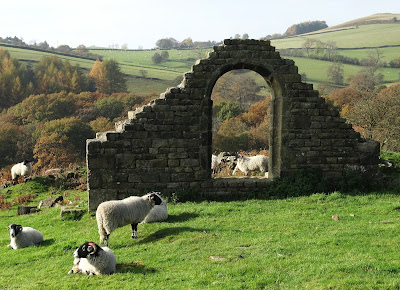