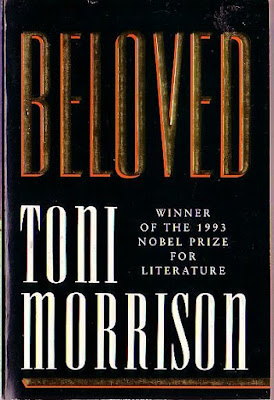 I was looking forward to reading this novel - inspired to do so upon hearing of the writer's death just last month. I expected an uncomfortable but engaging experience and understood that the book would explore the legacy of slavery. A song from the heart of Afro-America. I came to it with an open mind and a willingness to be wooed by Toni Morrison.

I read it carefully - chapter by chapter when we were on holiday in Croatia and finished it as our plane was touching down at Manchester Airport. But I have to report that I found "Beloved" to be  a frustrating read and quite a hard novel to get through.

I rarely expect a novel to advance steadily in time from Point A to Point B in the future. One expects a degree of backtracking, various literary asides and the presentation of different viewpoints but "Beloved" was all over the place and I often found it  hard to keep in mind who was narrating and when. It was frequently confusing.

There are mythical semi-fairytale elements to the novel and I did not take well to the strange lost girl known as Beloved who provided the novel's title. What is she? Is she human or imaginary or is she a ghost? I am a big fan of reality when it comes to writing and this novel often veered away from honest believability into a different realm where I was reluctant to go.

There were powerful and tenderly written episodes and at times Toni Morrison's much-acclaimed craftsmanship shone through. "Beloved" is filled with a range of human emotions and strong feelings and has an intimate historical sense of the Afro-American experience. Her use of language is often rich and original, moulding words, using them deftly.

Yes I can really see that Morrison is quite a writer but ultimately I didn't really like her characters - Sethe or Denver or Baby Suggs or Paul D.. I just did not warm to them and felt no real investment in their interrelated stories.

It's not how I wished to react to "Beloved". I wanted to say that it is one of the best novels I have read in a long time but sadly for me that was just not the case.
- September 17, 2019