If you thought that wedding-related posts had finished, you are mistaken. There will be two or three more to come. However...

Late on Friday afternoon I needed to burn off some energy and take some photographs too. I jumped upon my trusty stallion - Sir Clint and galloped out into the countryside. Twelve minutes later we arrived at the little car park by the copse at Dennis Knoll.

With boots on, I began a three mile round walk that took in the middle section of Stanage Edge. Though I am not a rock climber - and never have been - I know this escarpment very well. It is composed of millstone grit and looks westward towards the setting sun. It is around three miles in length.
Over on "geograph", the photo mapping site I contribute to, another member once referred to me as "The King of Stanage Edge" because I have submitted so many images of it. It is a nickname I rather like. Better than Fatty or Dragon Breath.

It was windy up on top of the edge - blowing a bloody gale it was - but not cold. I felt the energy of the wind - an invisible and mindless force - buffetting tough moorland grasses and my own mop of hair. If I had had someone to talk with we would not have heard each other. 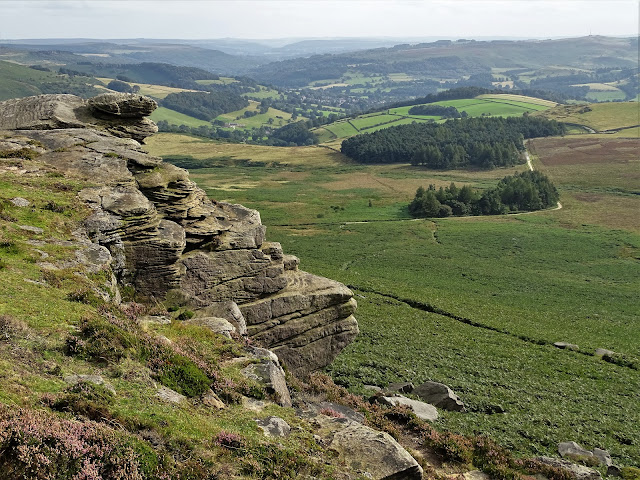 Some who have followed "Yorkshire Pudding" for a while will remember that historically many millstones were created at Stanage Edge. That production ceased entirely around the beginning of World War One when numerous finished and unfinished stones were simply abandoned close to the rock from which they had been hewn.
Today the symbol of The Peak District National Park - formed in 1951 - is quite appropriately a millstone.

At Clint's boot (American: trunk) I guzzled water from my steel flask before setting off home to prepare an evening meal of new potatoes, green salad and non-vegan rump steaks with fried onions and mushrooms. Getting back to normal folks.
- September 01, 2019