We went to Korčula today. It is an island off the Croatian coast. In fact you can see it from our hotel room - across the Strait of Pelješac - the sea channel between us.

The main town on Korčula is called... wait for it... Korčula. Its most ancient parts crowd round the main church on a small peninsula that is redolent with history. According to legend, the island was founded by Trojan hero Antenor in the 12th century BC. During the Byzantine period. the town was an important staging post and its limestone alleyways still echo with the sounds of a rich, long and influential maritime heritage.

Unfortunately, I had not fully charged my camera battery so I did  not gather the number of images I might have done today. Still, I collected enough pictures to provide you with a flavour of our trip across the water. And especially for dog lovers I have included a photo of a black hound we spotted in a first floor window. He was desperate to get outside. 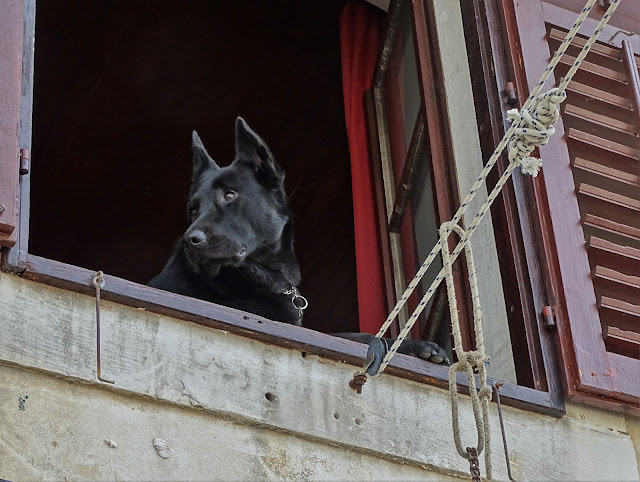 After four hours over there we jumped on the ferry back to Orebic and returned to our hotel from where I swam out to a distant orange buoy that I clung to before swimming back to the shore. Dinner this evening was again scrumptious and when wine and beer are effectively free, why stand on ceremony? Hic!
- September 09, 2019