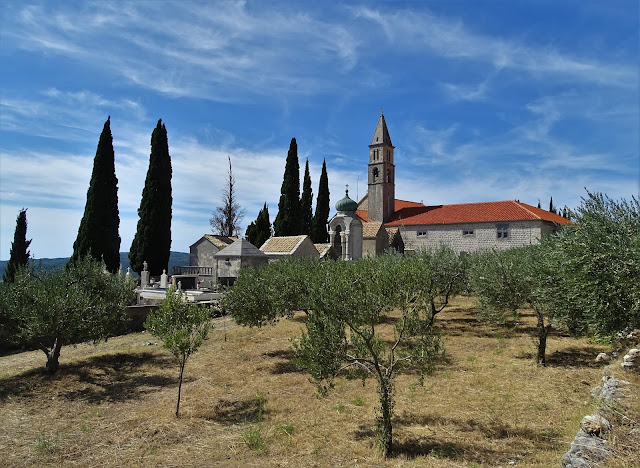 This morning, after a hearty breakfast, we plodded up the side of the mountain that looms behind our hotel. We were not heading for the summit as I might have wished but to a sixteenth century monastery that looks out to Korčula across the Pelješac sea channel from a craggy stone ridge.

The monastery was originally Franciscan and in Croatian it is called Gospa od Anđela which means Our Lady of the Angel.
There was a museum within - dedicated not to matters monastic and religious - but to Orebic's seafaring past. In glass cases there were many models of old sailing vessels and pictures on the walls of famous sea captains and more ships. Sadly, that heritage died out in the mid-twentieth century.
We wandered amongst the graves in the attached churchyard. Great slabs of polished granite and imposing family vaults. Here and there carved anchors spoke of lives lived and sometimes lost upon the sea. The view down to Orebic and beyond was spectacular. 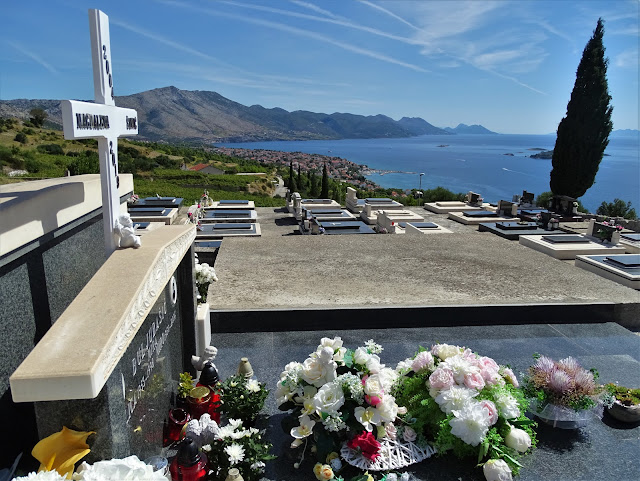 At twelve o'clock the monastery bells pealed frantically for ten minutes or more, echoing above the pine forest below. But by then we were on our way down, following a zigzagging stony path through the trees, enjoying the shade on what has been another hot Adriatic day.

In Yorkshire the word "nesh" suggests someone who won't take risks, preferring safety and comfort. Lady Pudding seems to be habitually drawn to that camp but after our hike to the monastery she ventured into the sea in spite of claiming it was "cold". In fact the September sea temperature here is very pleasant indeed and in the end she enjoyed her ten minute dip before lounging by the hotel swimming pool for most of the afternoon.