This morning I put my walking boots on and marched west - four miles along the peninsula. Shirley was happy just to veg out by the hotel pool with a book.

I stopped two or three times to read more chapters of "Beloved" by Toni Morrison. I am finding it hard going. It's not the kind of novel you race through.

At one of my shady stops I was joined by a thin fellow from New Jersey. He had just got off a motor launch. 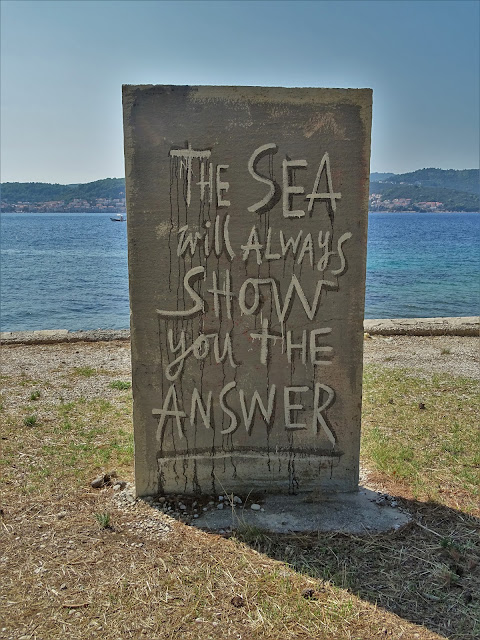 And that was his invitation to hammer home half-formed views about Brexit. He wanted to say something along the lines of - We've got Trump but your shit is worse buddy! No nice questions or remarks about family, pastimes, music, the meaning of life or the loveliness of Croatia - just straight into Brexit like a bird of prey. Quite annoying really. Perhaps he didn't realise that he had rudely interrupted my reading.

After ten minutes he got into a black Mercedes people carrier and was whisked away with his holiday companions. I was glad to see the back of him but I waved anyway. I suspect his name was Dick.
It wasn't the loveliest walk I have ever plodded but it was nice to be right next to the sea, burning off calories. I found a small village supermarket in which I bought a bottle of Diet Coke, an orange and a curly sausage roll. This was my lunch and soon I was walking back in the direction I had come from.

Back at the hotel it was time to swim - both in the sea and the pool. I fell asleep briefly on the white sunlounger and then came up to our room to polish up a short story I have been working on for an annual competition that is held in Sheffield. One thousand words is not very many.

Meanwhile our daughter Frances is now on the island of Hvar about thirty miles from here. It is a long weekend office getaway beano and she is there with fifteen work colleagues - all paid for by her company. That kind of thing never happens to schoolteachers.

Finally - a mummy cat and her four kittens in the hotel grounds. They have attracted a lot of happy attention from guests:- 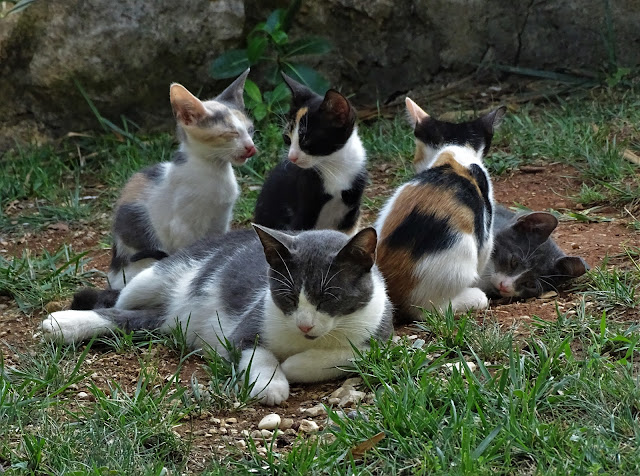