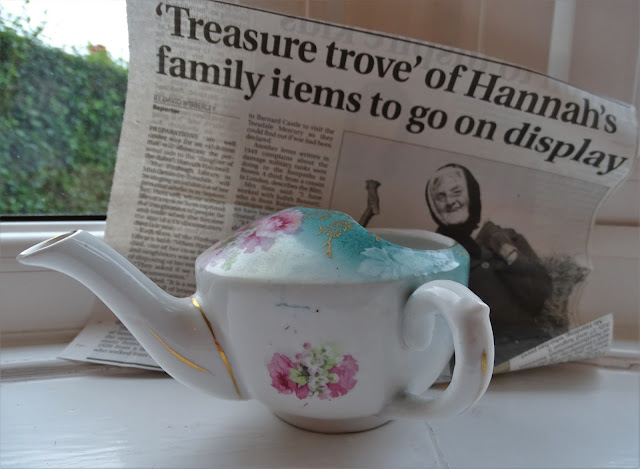 There's a little antiques shop in Middleton-in-Teesdale. It was closed when I arrived in the village and also on the morning of my stay. But a notice in the window told me that it would be open when I headed back from my long walk higher up the river valley.

I had spotted some old bottles in the window and figured I might buy another one for my little collection. In the event, I thought they were overpriced but noticed something else of interest in a display cabinet.

It was a newspaper clipping about the clearance of Hannah Hauxwell's house and next to this there was an old and rather unremarkable invalid cup. I spoke with the proprietor about this object and she confirmed that it had come from Low Birk Hatt Farm in Baldersdale where Hannah spent most of  her life.

Should I buy it? It was overpriced. I wandered around the shop for a further few minutes - agonising about parting with my dough. After all the invalid cup had not belonged to Winston Churchill or Elvis Presley or Queen Victoria - it had been used in a remote Yorkshire farmhouse by a humble family and had finished up in the possession of the last member of that family - Hannah Bayles Talentire Hauxwell (1926-2018).

The silver haired owner of the antique shop seemed a little like Hannah. A beatific smile and a scarecrow's sense of fashion. I fully believed her explanation of the provenance of the invalid cup and how it had come to be in her hands. Apparently there had been other items from Low Birk Hatt but this was the very last one. Furthermore, the proprietor had met Hannah on several occasions.

Suspecting I might regret walking away, I decided to buy the invalid cup - joking with the shop owner that one day my wife might use it to nourish me when I am lying in bed wasting away, preparing to meet my maker... The Almighty Google. 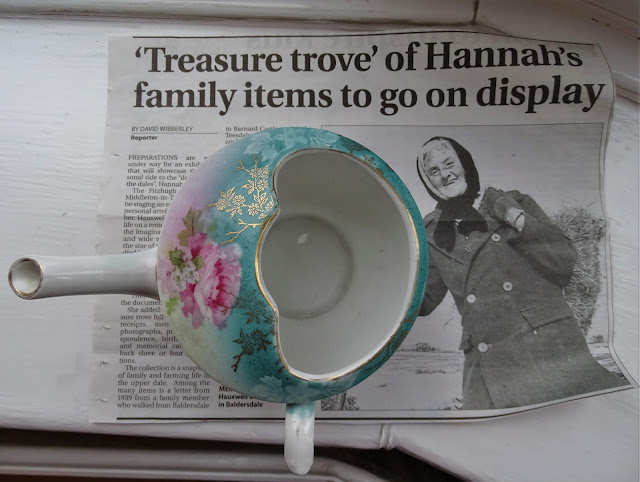