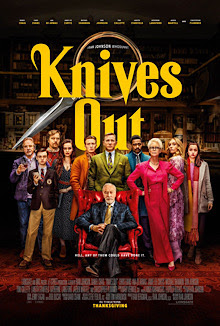 Three people had separately recommended "Knives Out" to me in recent weeks. This afternoon I went to see it without much idea of what I was about to witness.

It enjoys a star-studded cast including Don Johnson, Christopher Plummer, Jamie Lee Curtis and Daniel Craig. It is mostly set in a grand country house somewhere in Massachusetts. That house is owned by a successful murder mystery writer called - almost bizarrely - Harlan Thrombey.

Why did Harlan Thrombey die on the night of his 85th  birthday party?

It is a clever, sometimes amusing modern take on the traditional "whodunnit". There are twists and turns, an intuitive private investigator (Daniel Craig as Benoit Blanc) and a surprising conclusion. Some of it verges on the unbelievable - deliberate melodrama by the writer/director  Rian Johnson.

When it comes to the world of film we all have different preferences. If you enjoy crime drama and "whodunnits" in the vein of Agatha Christie you will probably be blown away by "Kinves Out".  However, it simply was not my cup of tea.

I get sick and tired of film dramas and TV shows that are built around murders and the activities of clever detectives. To me it is a tired, rather boring formula that I have difficulty relating to. I prefer gritty realism or films about everyday life that are either tender or disturbing. Why does there always have to be killing? I don't come across killing in my real life so why should it keep cropping up in cinema listings?

Good stories do not have to include  death  and rich drama that truly resonates with audiences can be drawn from the unlikeliest of situations by talented film makers who avoid opting for the lowest common denominator.
- December 19, 2019