Saturday evening saw your intrepid correspondent visiting The Crucible Theatre in the company of  two dolls - the adored wife and the beloved daughter. We were there to see a professional production of "Guys and Dolls" - a musical I had never seen before.

Though first performed on Broadway in 1950, Frank Loesser's show was built upon stories about New York written in the 1920's by Damon Runyon. The Sheffield production was slick and joyful with several brilliantly choreographed dance numbers and two songs I immediately recognised - "Luck Be A Lady" and "Sit Down You're Rocking The Boat" - the latter making the best section of the evening for me.

Here's what "The Guardian" had to say about it:- 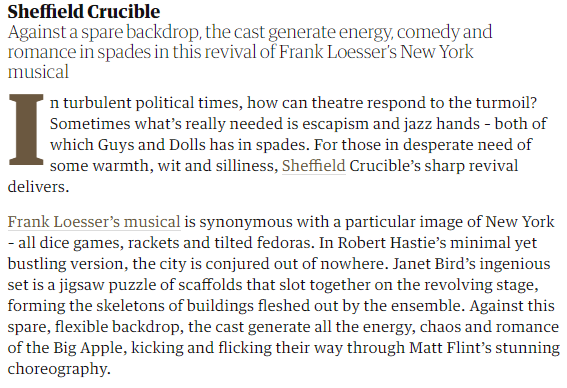 I was entertained but not wowed. The plot is so simple and predictable but I am a serious-minded guy  and for me the best of theatre is when it grabs me by the throat and draws me in - immersing me in what is happening on the stage till I forget myself. Somehow I felt emotionally removed from "Guys and Dolls".

Afterwards we stopped off at "The Stag's Head" on Psalter Lane for post-theatre drinks. Naturally my two dolls had loved the show and felt uplifted. Those two pints of "Lord Marples" by Thornbridge Brewery did the trick for me.
- December 23, 2019