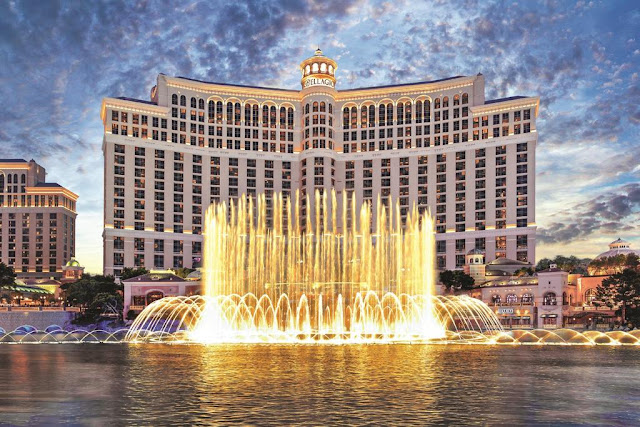 A lavish ceremony in The Bellagio Hotel in Las Vegas had been planned for this year's Laughing Horse Blog Awards ceremonies - with bloggers flying in from across the world. However, following heated debate within the organising committee, it was eventually decided to scrap the Las Vegas plan on environmental grounds.

The carbon footprint for The Las Vegas event would have been as large as Liechtenstein or Luxembourg - especially when you factor in all the air miles. Most bloggers known to the Yorkshire Pudding organisation really care for our planet and demonstrate that care through recycling and energy reduction measures. So how could we in all honesty have gone ahead with the Bellagio event? It would not have made sense and we would have been pilloried by the tabloid press and Fox News as climate hypocrites.

You may recall that last year's overall "Blogger of the Year" was none other than Mary Moon, author of "Bless Our Hearts" out of Lloyd, Florida. It will soon be time for Mary to pass her cherished crown to someone else. Her amazing year will be over. The highlight was surely her June visit to The White House where she took tea with Melania, The First Lady. They spoke about many things, even comparing the merits of their respective husbands. There is no truth in the rumour that Mary was escorted from the premises yelling Anglo-Saxon epithets at the Slovenian ice maiden.

Can you wait for tomorrow? That is when The Laughing Horse Blog Awards for 2019 will be announced here on this most ancient blog. To whet your appetites, here's a list of previous  Bloggers of the Year:-