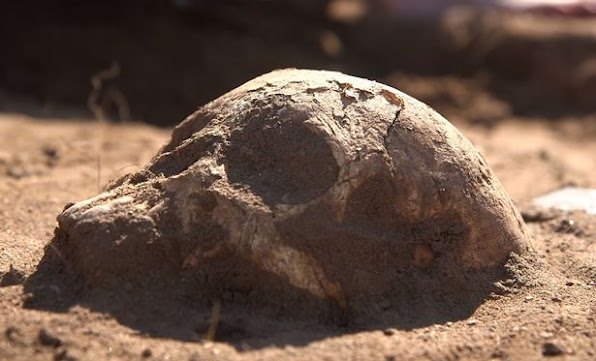 Another cheery blogpost for mid-January. With The Black Death in mind, let us go a-rambling once more but walking boots are unnecessary...

In the 250 years between The Norman Conquest of England and The Black Death, many great abbeys were established. Populated by monks, they were not all about worshipping and serving God. They possessed huge swathes of  good farmland. In squeezing rents from tenanted farmers, the abbeys prospered.

The control that these Roman Catholic abbeys exercised was a legacy of the Norman invasion  which would later drive King Henry VIII to destroy them. They had a very good run. 450 years of enormous financial and political control as kings and queens looked on.

I was born and grew up in a village called Leven - located right in the heart of The East Riding of Yorkshire. On the outskirts of our village was a stone pillar known as White Cross. It marked the original boundary of lands that were under the control of a nearby monastic settlement - Meaux Abbey.  Though White Cross endures Meaux's stones were carted away long ago.

Established in 1150, the abbey grew and prospered. As well as the resident abbot and his monks, lay brethren  lived within the abbey precincts. It was five miles from my home and  the fertile lands in its possession reached east to the North Sea coast and down to The Humber Estuary.

In 1339, the fifteenth abbot of Meaux Abbey was appointed. He was called Hugh de Leven  so I imagine that he had a special connection with my home village. Maybe, like me, he was also born there. In 1349 when The Black Death arrived at Meaux Abbey, Hugh de Leven died along with half of the other residents. The plague also tore through local farming communities. Suddenly, the abbey's power and wealth nosedived.

Crops were not harvested or sown and animals were not tended. Many ploughmen had died along with monks who would have collected the rents. Prosperity often survives in a delicate balancing act but The Black Death had tipped that balance into chaos. Not just at Meaux but across the nation. Plaque by the quay in Melcombe Regis, Dorset

In lightly researching The Black Death with the kind assistance of Professor Google, I have been surprised about how little contemporary art or literature reflected what went on. Geoffrey Chaucer wrote his famous "Canterbury Tales" near the end of the fourteenth century , well within living memory of  "The Pestilence". He was most likely born in London in the early 1340's so though he was a survivor,  The Black Death would have certainly struck down members of his immediate family.

The world was much changed for Chaucer's generation but there is surprisingly little reference to the plague in "The Canterbury Tales". Only in "The Pardoner's Tale"  do we get a hint of the deadly pandemic - "He hath a thousand slayn this pestilence...".

Here's an illustration from a manuscript created during the height of the plague in Tournai, Belgium:- 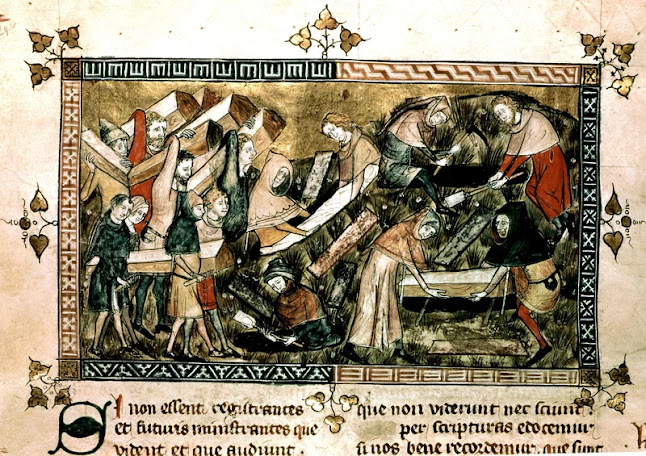 Burying the dead would have been both problematic and scary. So many gravediggers, priests and coffin makers  had passed away and the fatalities seemed innumerable.  In major European towns and cities, mass graves were dug. Some of these have been studied by forensic archaeologists in modern times, allowing further understanding of the horror and the woe of a plague that killed over  25  million people in Europe alone - over a third of the continent's total population.
Inside my brain a seed has been planted. I would like to write a poem in memory of those tragic times and in honour of the people who died.  One day soon I hope - unless the current plague gets me first... Thanks for  reading.
- January 11, 2022